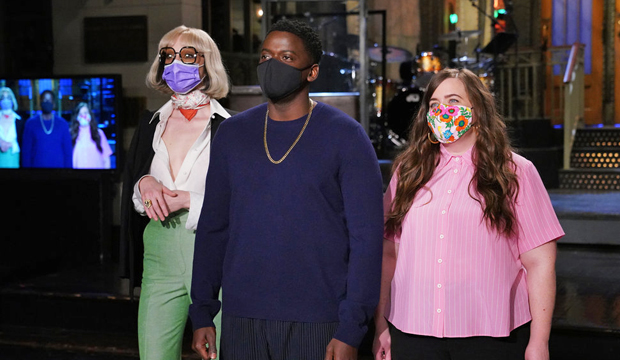 Daniel Kaluuya hosted the April 3 episode of “Saturday Night Live,” with musical guest St. Vincent. This was Kaluuya’s first time hosting the NBC sketch series, and it couldn’t be timed better, with the actor just earning his second Oscar nomination for “Judas and the Black Messiah.” For his opening monologue, Kaluuya addressed a number of current events. To start, he spoke with his natural British accent, which American audiences may not be used to, quipping, “I know you’re hearing my accent and thinking, ‘Oh no, he’s not Black. He’s British.'”

Kaluuya spoke about racism in Britain. “Basically, I’m what the royal family was worried the baby would look like,” he joked, resulting in a big reaction from the audience. The actor noted that British racism is so bad that white people left, so they could be free to “create their own kinds of racism.”

The actor noted that despite winning a Golden Globe for his performance, he was done dirty on the broadcast itself. As Golden Globes viewers may remember, Kaluuya was muted for the first part of his speech. He mentioned feeling like he was “in the Sunken Place,” a reference to his role in “Get Out.” Still, he was happy to be on the “Saturday Night Live” stage now, telling a story about writing a play when he was nine years old based on “Kenan & Kel,” the Nickelodeon series starring current “SNL” cast member Kenan Thompson.

In addition to his Golden Globe win, Kaluuya took home a Critics Choice Award for “Judas and the Black Messiah.” This has made him the frontrunner to win Best Supporting Actor at the Oscars, three years after his first nomination for “Get Out.”