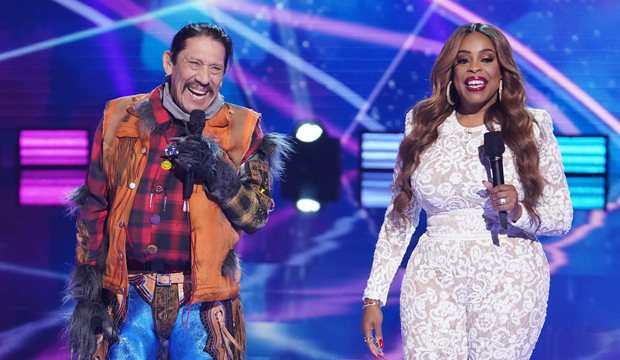 The panelists on “The Masked Singer” were stunned at the conclusion of Wednesday night’s episode when the Raccoon was unmasked and revealed to be movie star, activist and restaurateur Danny Trejo. None of them guessed the “Machete” star was the dumpster diving crooner belting out “Ring of Fire” off-key from the stage. But despite Danny’s lack of musical talents, he had a great time on the show.

“I feel like a winner, I don’t care,” Danny asserted during his unmasked interview with guest host Niecy Nash. “Besides that, I was a cute Raccoon.”  Throughout Danny’s clue packages and performances, he often mentioned a fondness for panelist Jenny McCarthy. “Jenny, I’m helping raise two autistic kids,” he explained. “I love the work that you do. And I mean that from the bottom of my heart.”

Jenny was appreciative of Danny’s kind words, but she and her co-panelists Ken Jeong, Nicole Scherzinger and Robin Thicke were way off base when trying to guess the Raccoon’s identity. Jenny thought it was Gary Busey, Ken guessed Danny DeVito, Nicole went with Sylvester Stallone and Robin predicted the Raccoon was Tony Danza.

“Let me tell you something that was funny,” Danny responded to their guesses. “Everybody that they mentioned, I’ve done a movie with!” Despite the panelists being off the mark with their guesses, various hints in the Raccoon’s clue packages were pointing them toward Danny. The box cutter in Raccoon’s package was a nod to Danny’s boxing history, and sharp characters he’s played, including Machete. The donut in his package was for Danny’s famous shop, Trejo’s Coffee and Donuts.

“God bless you guys. This was an awesome show and I loved it,” Danny expressed with a smile before the credits rolled. Danny was the second celebrity unmasked from Group A and the third overall. He was preceded by Kermit the Frog as the Snail and Caitlyn Jenner as the Phoenix. Moving forward from Group A are Robopine, Russian Dolls, Seashell and the newly introduced wildcard, Orca. Did you guess Danny was hiding behind the Raccoon mask?