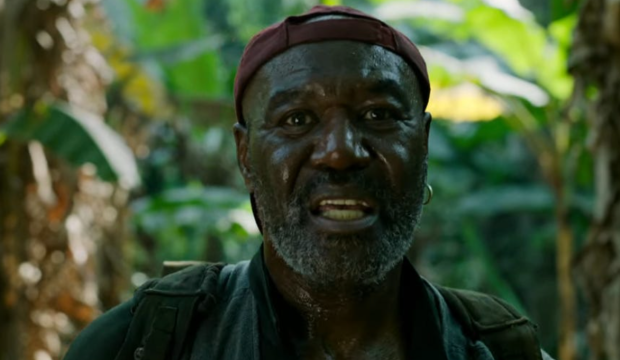 Delroy Lindo goes full-tilt boogie in his extraordinary performance as Paul, a Vietnam vet and widower who is suffering from PTSD and incredible guilt in Spike Lee’s “Da 5 Bloods.” Especially in Paul’s monologue about two hours into the Netflix release: chopping down bamboo as he makes his way through the jungle in Vietnam, Lindo’s Paul stares into the camera as he rants, raves and rambles about his years of disappointment since the war and confesses he’s dying of cancer because of Agent Orange exposure during the conflict. He’s both terrifying and heartbreaking as he looks into our hearts and souls and informs everyone no one is going to tell him when and where he is going to die except himself.

In a recent Zoom conversation with Jonathan Majors (“Lovecraft Country”), who plays Paul’s estranged son David, moderated by Variety’s Jenelle Riley, Lindo noted he wasn’t intimidated doing the monologue to the camera. “It was more of a question of this is what I have to do,” said the British-born Lindo, who has already won Best Actor honors from the National Society of Film Critics and New York Film Critics Circle. And our exclusive odds have him as a front runner at the Oscars.

“By the time we shot that particular scene, it was probably five to six to seven weeks into the shoot, I want to believe that I was sufficiently conversant with Paul. Paul had dropped into me with enough depth that I could on that morning that we shot the scene, just simply attempt to do my work, which is what I did.” He has been somewhat caught off guard how audiences “have responded to that piece of work. But I want to believe that that is actually an affirmation for Paul. There are certain people, and it’s okay, who feel that those moments in the film are manifestations of Paul’s disintegrating emotionally, disintegrating mentally.”

But Lindo believes Paul is just speaking his truth “very, very clearly.” Lee shot multiple takes of the scene which Lindo appreciated “because each take was slightly different. I would add certain things, small things.” The filmmaker, he noted, wasn’t asking him to do several takes because he was dissatisfied with his performance. “He was asking me to do those multiple takes because there was something rich that was happening in those moments,” Lindo explained. “Each take added something. I remember the small things that I was adding. They were small to the overall arc of what I was saying. They felt right for me in the moment.”

Lee, he recalled, did give him two directions. On the first take, Lindo came through the underbrush, stopped and look around. Lee told him “’No, no, No. When you come through, keep walking. Keep moving.’ That’s the only physical direction. The second thing I heard him say during that scene, I overheard him say, ‘Leave him alone. He’s in the zone. Leave him alone.’ He used more colorful language than that!” The actor had worked with Lee on 1992’s “Malcolm X,” 1994’s “Crooklyn” and 1995’s “Clockers.”

“Da 5 Bloods” was Major’s first film with Lee. “He’s dynamic,” said Majors of Lee. “It’s his dynamics that allow for different types of actors to be able to work with him. There are moments when it feels like he’s Pat Riley, Phil Jackson. You don’t know which one you’re going to get on the day. He coaches sometimes.  He comes in and says, ‘I want you to do this and this and this and this and then go over there.” He remembered one time Lee just yelled out to him “Do it, Morehouse, do it.” Majors’ character David, just as Lee, attended the traditional black college. “My mind was right, just do it,’ said Majors.

Lindo added that “Spike saying to Jonathan ‘Do it, Morehouse,’ he knows that he’s going to elicit from Jonathan. That’s part of his brilliance.” As for Lindo, he noted one of the most rewarding aspects of working with Lee is the underlying trust the director has in him as an actor. “He’s exhibited that from the time we worked together on ‘Malcolm X’ in very particular, specific ways,” noted Lindo.  “That does not mean we don’t have disagreements. We do. But the most important thing is those disagreements are resolved in such a way that the work continues. The work flows.”