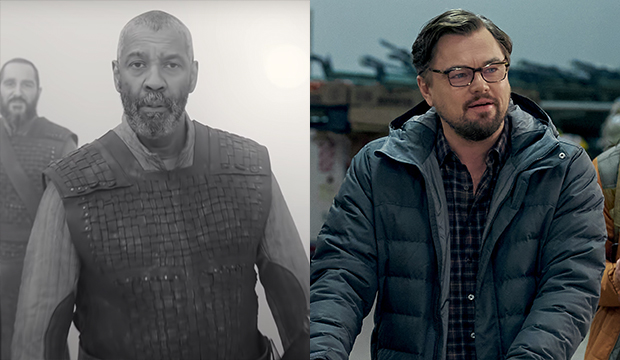 There’s nothing tragic about Denzel Washington’s chances at the Screen Actors Guild Awards. And Leonardo DiCaprio shouldn’t hang his head either. Both men are poised to potentially earn lead actor nominations this year. Should they both receive bids, it would extend the record for the most nominations ever in the category to six, as they’re currently tied with five apiece.

Washington was last nominated in 2018 for his turn in “Roman J. Israel, Esq.” (2017). His four previous ones were for “The Hurricane” (1999), “Training Day” (2001), “Flight” (2012) and “Fences” (2016), the last of which brought him his only win in the category. But he’ll likely have a shot to add a bookend soon. Washington stars in the title role of Joel Coen’s “The Tragedy of Macbeth,” and his performance as (one of the) doomed king(s) of Shakespeare received rave reviews when the black-and-white film premiered in October. Right now, his odds reflect the strength of his onscreen accomplishment: He’s in third place in Gold Derby’s combined odds at 5/1, with one Expert predicting him to win. He trails only Will Smith of “King Richard” (17/5 odds) and Benedict Cumberbatch of “The Power of the Dog” (4/1 odds), while Andrew Garfield (“Tick, Tick…. Boom!”) and Peter Dinklage (“Cyrano”) round out the top five.

SEE Oscar Experts Typing: Who will round out the Best Actor lineup?

Meanwhile, DiCaprio is sitting just below them — in sixth place and with 18/1 odds — for his turn as a low-level scientist attempting to warn the world about a comet that will destroy Earth in Adam McKay’s latest film, “Don’t Look Up.” His path to a sixth lead actor nomination is a little less certain than Washington’s. He was recently shut out of the Critics Choice Awards, which has six spots in its acting categories (sometimes more) and prides itself on accurately forecasting who will be nominated for an Oscar. The five men above DiCaprio in the odds received nominations, as did Nicolas Cage (“Pig”). Meanwhile, “Don’t Look Up” received, uh, lukewarm reviews from critics. However, there are a couple other things to consider before writing DiCaprio off completely.

First — and this should be obvious — he’s Leonardo DiCaprio; only a fool would bet against him at this point knowing both his talent and his history at the SAG Awards. Which brings us to our second point: He is also the most nominated actor on the film side, with six nominations in total: one in the supporting category for playing undercover cop Billy Costigan in Martin Scorsese’s gangster drama “The Departed” (2006), and five in lead actor. This means a nomination for “Don’t Look Up” would not just extend DiCaprio’s tie with Washington in lead actor (should he also be recognized), but it would also extend his record as the most nominated male performer on the film side, bringing his total to seven nominations (though he would still be four shy of tying Meryl Streep on the women’s side).

DiCaprio received his first lead bid for playing Howard Hughes in “The Aviator” (2004). He followed that up with a one for his turn in 2006’s “Blood Diamond” (also known as the reason DiCaprio was nominated in supporting for “The Departed” even though he’s not a supporting actor in that movie). His other three were for “J. Edgar” (2011), “The Revenant” (2015) and “Once Upon a Time in Hollywood” (2019). Like Washington, DiCaprio has only gone home a winner once at the SAG Awards, triumphing for “The Revenant,” the role that also earned him his first and only Academy Award. (Washington has two Oscars, for 1989’s “Glory” and “Training Day.”) While it’s a long shot that DiCaprio will take home the SAG Award this year, a sixth lead actor nomination — and another entry into the history books — certainly isn’t out of the question.