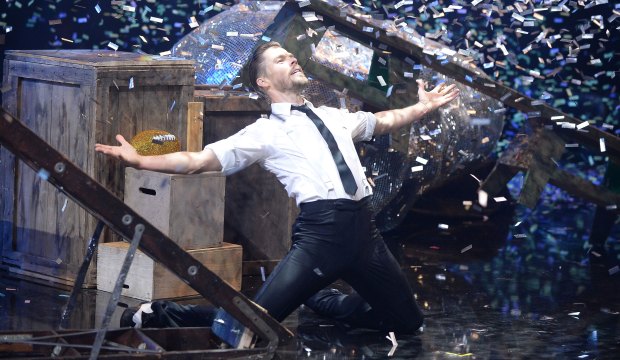 Derek Hough is one of the most honored choreographers in Emmy history, and on Sunday night, September 12, he won the third trophy of his career: Best Choreography for Variety or Reality Programming. He was actually nominated twice in that category, with his “Dancing with the Stars” routines besting his work on “The Disney Holiday Singalong.” Scroll down to watch the two routines he prevailed for.

Hough prevailed for two exhibition routines he created for “DWTS” last fall: a paso doble to “Uccen” and a tap dance to “Let’s Fall in Love for the Night.” He didn’t compete for the Mirror Ball Trophy last season as he has in the past (he holds the record with six “DWTS” championships), but he joined the show as a full-time judge, stepping in for British panelist Len Goodman, who was unable to travel back to the US due to the COVID-19 pandemic. Hough has won all three of his Emmys for “DWTS.” Previously, he took home this award on his own in 2013 and with co-choreographers Julianne Hough and Tessandra Chavez in 2015.

SEE‘Dancing with the Stars’ season 30 cast: These 15 celebs are competing for the Mirror Ball Trophy

This wasn’t the first time he’s received multiple noms in the same year — he had a second bid when he won in 2013 — but these two citations brought him to a total of 11 nominations, more than any other male choreographer in history and placing him second only to Debbie Allen, who got her 12th nom this year for “Christmas on the Square” in a separate choreography category for scripted programs.

And Hough just keeps chasing Allen in the record books: Allen won for “Christmas” right after Hough won for “DWTS.” So Allen sets a new record as the most awarded choreographer in Emmy history with four trophies, and now Hough is one of seven choreographers to have won three, along with Tony Charmoli, Marguerite Derricks, Alan Johnson, Mia Michaels, Mandy Moore, and Walter Painter. But if any TV choreographer deserves the all-time Emmy record, I doubt even Hough would argue against the legendary Allen.