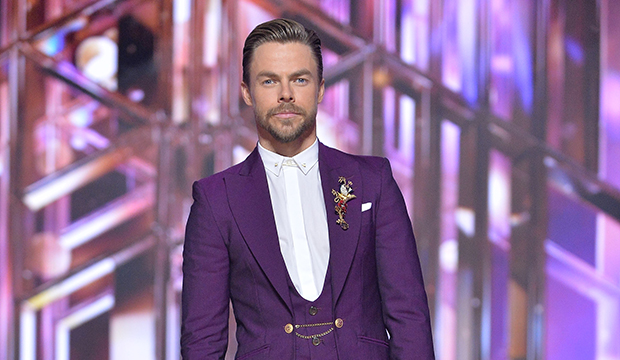 Derek Hough sat out Monday’s “Dancing with the Stars” due to possible exposure to COVID-19, but that wasn’t the only show the judge missed. The prior night, Hough’s Sunday performance of his Las Vegas residency, “Derek Hough: No Limit,” at The Venetian was canceled.

“Unfortunately, the Event Organizer has had to cancel your event,” a Ticketmaster statement for the show read. An explanation for the cancellation was not offered, but Hough’s absence from “Dancing” provided clarity.

“Due to a potential COVID exposure, and although he’s fully vaccinated and tested negative, Derek will sit out tonight’s show out of an abundance of caution,” Tyra Banks announced at the top of the episode, the third of the season, which paid tribute to Britney Spears.

Hough is the third “Dancing” cast member impacted by COVID in Season 30. Last Sunday, Cheryl Burke tested positive, forcing her to miss last Monday’s show while the judges critiqued rehearsal footage of her and Cody Rigsby‘s salsa. On Thursday, Rigsby tested positive, and the two, who are both fully vaccinated, performed virtually Monday night from their separate homes. Their jazz, to Spears’ “Gimme More,” scored an 18, the lowest of the night, but they were safe.

Unlike Rigsby and Burke’s remote performance, Hough did not judge virtually — it’s also much harder to observe details and footwork over Zoom — nor was he replaced, so the original panel of Len Goodman, Carrie Ann Inaba and Bruno Tonioli was back in action Monday.

Hough was two weeks into the “Dancing” season and his Vegas show as the latter kicked off two days after the Season 30 premiere. The three-time Emmy winner previously said that he planned for them to overlap because he wanted “synergy.” It’s so much easier being a judge on the show than it is being a pro dancer in terms of the emotional, mental and physical demands,” he explained. “I think having [my] show and being a judge will complement each other. It’s a short flight between Los Angeles and Las Vegas.”

Hough performs five nights a week in Vegas — Wednesdays through Sundays — and his next scheduled show was always Wednesday, Oct. 13, tickets for which are still on sale. It’s unclear if he’ll return for “Dancing’s” two-night Disney Night next week on Monday and Tuesday.