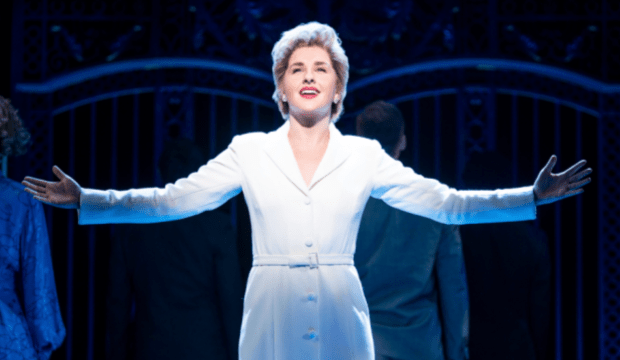 Diana, Princess of Wales has been portrayed in no shortage of high profile works of fiction this past year, from her introduction on the fourth season of Netflix’s “The Crown” to Pablo Larraín’s new film “Spencer,” and now a new Broadway musical. After beginning previews last March just before the coronavirus pandemic shuttered New York theaters, “Diana: The Musical” returned to the Longacre Theatre on Nov. 17 with Jeanna de Waal in the title role.

“Diana” chronicles nearly two decades in the life of its title character as she enters the public eye and becomes internationally recognizable. Joe DiPietro and David Bryan, the Tony-winning team behind the Best Musical winner “Memphis” (2010), reunited for “Diana” with DiPietro contributing book and lyrics and Bryan the score. Tony-winner Christopher Ashley directs and also reunites with a fellow “Come From Away” alum, the Tony-nominated choreographer Kelly Devine. Broadway stalwarts Erin Davie and two-time Tony winner Judy Kaye also star.

Despite the show’s awards-minted talent, “Diana” disappointed critics. Helen Shaw (Vulture) tries to meet the show on its terms, acknowledging, “Camp should be possible,” and that “cheesy is fine; goofy fake accents are no problem.” She writes that the show totally misses its mark, though, based on its “faltering execution” and its “dullness and repetition.” The “best ‘Diana’ can hope for is that its tackiness will transform, through the magic of mess-addicted theatergoers, into a sort of warmly accepted kitsch,” Shaw says, though she ends by emphasizing how, in a second-act musical number in which Diana visits HIV-positive hospital patients, “it turns sort of gross, too.”

Naveen Kumar (Variety) offers compliments to the ensemble, including de Waal, for her ability to combine “soft warmth and rough candor,” and Kaye, for “admirably overcoming the absurdity of Queen Elizabeth II bursting into song.” But otherwise, he too finds the piece “almost impressively artless” and an example of the musical theatre’s “basest, bluntest, most blatantly pandering form.” Kumar deems the score “relentlessly generic” while noting the “remarkable crudeness” of its lyrics and lamenting that the should “could be camp” if executed better. “What makes ‘Diana’ so perverse,” he concludes, “is its refiguring of a real-life tragedy – with survivors who remain in the public eye – into a sort of limp and misshapen rom-com.”

Jesse Green (New York Times) labels “Diana” “the tawdriest and least excusable wholesaling of a supposedly true story ever to belt its way to Broadway.” He homes in on how the show treats its real-life central figure, writing pithily that “if you care about Diana as a human being, or dignity as a concept, you will find this treatment of her life both aesthetically and morally mortifying.” As a work of musical theatre, Green says “there’s no time for coherence, let alone subtlety,” calls the songs “cold and crass,” and notes how “it’s not even campy fun.” He does spotlight Davie’s work, though, saying the actress is able to “find something human” in Camilla Parker Bowles.

Unless Tony Awards nominators disagree with the majority of critics and enjoy “Diana” for its almost campy chaos, it is hard to fathom how it breaks through with awards voters next spring. In a less competitive Broadway season, “Diana” could have perhaps nabbed a few nominations, but the show is just one of an impressive eight new musicals slated to open during the eligibility period, including “Six,” “Girl from the North Country,” “Mrs. Doubtfire,” “Flying Over Sunset,” “MJ The Musical,” “Paradise Square,” and “Mr. Saturday Night.” Based on this number of shows, there will only be four slots in Best Musical, and with “Six” and “North Country” already so well received and other promising works yet to open, the nominators will likely support something else.

If any member of “Diana” could potentially rise above the critical fray, it could be either lighting designer Natasha Katz or scenic designer David Zinn. Both have long histories with the Tonys: Katz has six Tonys out of an impressive 14 nominations, and Zinn has two trophies from his seven bids. They each have other projects upcoming this season, though, with Katz working on “MJ The Musical” and Zinn contributing to the play “The Minutes” and the revival of “Funny Girl.” If those shows fare better with the industry and audiences, Katz and Zinn will likely earn recognition for those spring projects instead.