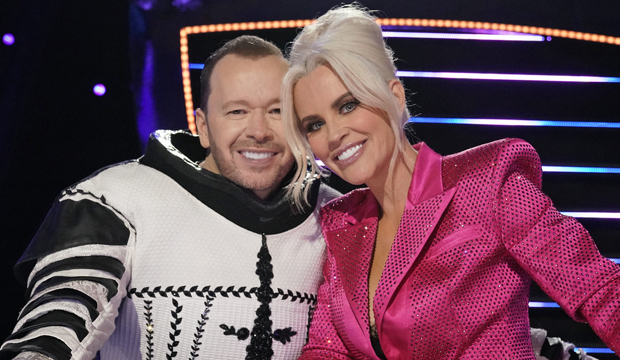 Black Swan, Chameleon, Piglet and Yeti took the stage in the Season 5 semifinals of “The Masked Singer” on Wednesday night, but as usual, they were interrupted by that clucking hint-dropper Cluedle-Doo. The feathered villain who tried to spill the beans on everyone’s identities throughout the season hopped onstage himself for a performance of “Return of the Mack” before pulling off his own mask to reveal singer, actor and husband of Jenny McCarthy, Donnie Wahlberg.

“There’s two reasons why I’m here, honestly,” Donnie revealed during his unmasked interview with host Nick Cannon. “One, obviously to see my wife. And two, it’s been so long since I’ve performed for my fans and New Kids on the Block fans, affectionately known as Blockheads, they are like family. They’re my heart. So I did it for my ladies, brothers and of course my lady too.”

Upon seeing her sneaky spouse on stage, Jenny fell to the floor and screamed, “Oh my God! I’m shaking!” She promptly grilled the New Kid, asking, “Have you been coming in each week and lying?” to which Donnie replied, “I’ve been sneaking in and out.” Although the panelist was a fan of her husband’s role, she was mortified she failed to recognize his voice. “I’m supposed to have golden ears,” she complained. “I didn’t recognize my husband’s voice!”

“His tone reminded me of Akon, so I think that this could be Akon,” Jenny said prior to Donnie’s unmasking. But the rest of the panelists fared no better. Prior to taking it off, Cluedle-Doo dropped a hint for Ken Jeong in the form of a giraffe before saying, “Ken, this isn’t the first time we’ve been around animals together, but it will be the last.” This led Ken down the right path, but he picked the wrong “Zookeeper” costar, Kevin James. Robin Thicke and Nicole Scherzinger both thought it was their go-to celebrity guess, Jamie Foxx.