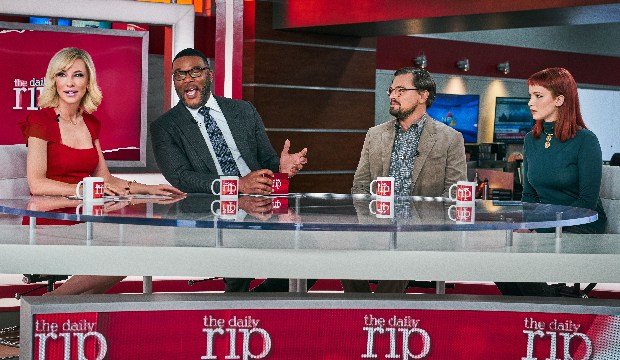 One of the year’s last major awards contenders to surface is Adam McKay’s “Don’t Look Up,” the Oscar-winning writer and director’s all-star satire about a massive comet heading toward Earth and the two people (Leonardo DiCaprio and Jennifer Lawrence) trying to get society to take the extinction event seriously. On Tuesday, just days before “Don’t Look Up” will have its first industry and press screenings, Netflix released a full trailer for the film highlighting its madcap energy and gallows humor.

Opening with onscreen text that warns “Don’t Look Up” is “based on real events that haven’t happened yet,” the trailer introduces Dr. Randall Mindy (DiCaprio) and Dr. Kate Dibiasky (Lawrence), who try in vain to warn the President of the United States (played by Meryl Streep), her foolhardy administration (embodied by the president’s son, played by Jonah Hill), and cable news talking heads (Cate Blanchett and Tyler Perry) about the coming end of humanity. It goes poorly.

McKay, who won Best Original Screenplay for “The Big Short,” wrote the script for “Don’t Look Up” based on a story by himself and David Serota. Originally, the film was envisioned as a parable about climate change, but McKay was forced to halt the production last year in the early stages of the coronavirus pandemic. When he picked the script back up months later, he realized it remained incredibly timely, he told the Los Angeles Times.

“I was amazed to see that the script actually isn’t about climate change. It’s about how our lines of communication have been shattered and broken and profitized and manipulated,” he said. “And that actually the engine of all the farcical comedy is that — and it totally still works. I checked in with Jen Lawrence and Leo and a couple of the cast, and I’m like, ‘I’m reading this, and I actually think it tells a whole different story, which was really the cause of why we haven’t been doing anything about climate change.’”

“Don’t Look Up” is one of many awards contenders Netflix has in its war chest this year, but few of the streaming platform’s projects can compete with its starry cast and pedigree. DiCaprio, Lawrence, Streep, Blanchett, and Mark Rylance are all past Oscar winners, while Hill and co-star Timothee Chalamet are former Oscar nominees. In addition to those names and Perry, the film also stars Rob Morgan, Ariana Grande, and Scott “Kid Cudi” Mescudi. Netflix will release “Don’t Look Up” on December 10 in theaters before it arrives on the streaming service starting on Christmas Eve.