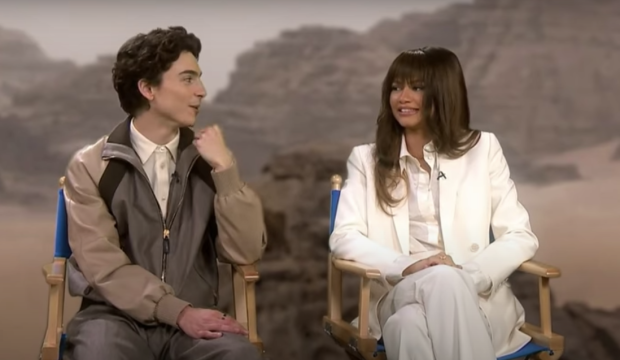 Stephen Colbert loves “Dune.” He loves Frank Herbert’s sci-fi novels, and he loves Denis Villeneuve’s epic adaptation, which is now in theaters and on HBO Max. “It’s an awe-inspiring, big and beautiful movie with incredible performances from a truly amazing cast,” the host said on Thursday’s “Late Show.” His guests for the evening were two of the film’s stars, Timothée Chalamet and Zendaya. And in a twist on the usual late-night interview, he interviewed them on the desert planet Arrakis.

The bit began with Colbert, in his suit and tie, walking around in the empty desert, calling out to anyone with something to promote. Eventually, he came upon Timmy and Meechee, all glammed up and sitting in director’s chairs in the vast emptiness.

Chalamet, who plays Paul Atreides, the chosen one, said that his favorite parts of the movie are Zendaya, who plays Chani, a desert-dweller with whom Paul has a mysterious spiritual bond, and Jason Momoa, who plays swordsman Duncan Idaho. “And I’m sure that Oscar Isaac and Rebecca Ferguson won’t be offended at all,” Colbert joked. “Or Josh Brolin or Stellan Skarsgård or Javier Bardem,” Chalamet added. What a cast.

Zendaya said that when she was auditioning for the part, she was nervous to go in for her chemistry read with Chalamet because she had recently gotten her wisdom teeth removed and she was worried she would have “dry socket,” an infection that causes bad breath. What if she was performing an intimate scene with Chalamet and her mouth reeked? “That was, like, my biggest fear,” she said. “But it didn’t happen, and here we are.”

They also seem to genuinely not know if “Dune” is getting a sequel. The answer seems to be “probably.”

Colbert also played a trivia game with the two stars called “Duner or Later.” They had to say whether things Colbert named were older or younger than the book “Dune,” which was first published in 1965.

They got “Star Wars” no problem, but Spider-Man? “Oh, damn, I should know this,” Zendaya, who plays MJ in the Marvel franchise, said quietly. But Chalamet guessed it was “Duner,” meaning before “Dune,” which was correct. Peter Parker began slinging his webs in 1962.

How about dune buggies? Chalamet is from New York City, and he didn’t even know what that is. Zendaya guessed “Duner,” and she was right. 1964.

Doritos? They guessed “Later,” because Doritos feel like a very modern snack. But they were incorrect. Doritos were introduced in 1964.

Finally, there were the combined ages of Zendaya and Timothée Chalamet. They’re both 25, so, obviously, later. There’s no getting one over on Timmy.

Emmy Experts Typing: Can Melanie Lynskey and Rhea Seehorn take down a pair of former champs?