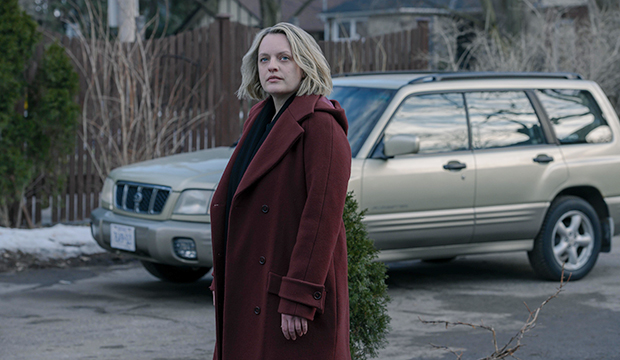 Believe it or not, Elisabeth Moss still doesn’t have an individual Screen Actors Guild Award to her name. A 15-time nominee, she has won twice as part of the “Mad Men” ensemble (2009-10), but she has lost all six of her solo bids, of which she earned two for “Mad Men” (2009, ’11) and and three for”The Handmaid’s Tale” (2018-20) for TV drama actress, and one for “Top of the Lake” (2014) for limited Series/TV movie actress. Back in the running for “Handmaid’s'” fourth season and currently in third place in our early SAG Awards odds, Moss is now vying her seventh individual nom and might have her best shot yet at finally taking home her first solo statuette.

Moss presumably came close to winning in 2018, when she was the overwhelming odds-on favorite after sweeping the Emmys, Golden Globes and Critics Choice Awards for “Handmaid’s'” first season, but ultimately fell to “The Crown’s” Claire Foy. While arguably a head-scratcher at the time, Moss being bested by Foy makes sense in retrospect since the latter was the defending champ for “The Crown” and repeat victories are common at the SAG Awards. Plus, Foy went on to beat Moss (though for “Handmaid’s” second season) later that year at the Emmys, where, like at the SAG Awards, she competed for her second and final installment of “The Crown.” At this year’s Emmys, where Moss contended for “Handmaid’s'” fourth season, she lost to another “Crown” actress, Olivia Colman, who took over the role of Queen Elizabeth II from Foy in the third and fourth seasons, winning the Emmy for the latter. But the good news for Moss is that “The Crown” already competed for its fourth season at the SAG Awards in April — where it claimed its second consecutive drama ensemble prize and the drama actress statuette once again, for Gillian Anderson — and is sitting out the current cycle.

In 2019 and ’20, Moss lost to “Killing Eve’s” Sandra Oh and “The Morning Show’s” Jennifer Aniston, respectively, of whom only the latter is contention this year. Although Aniston, who tops our odds after being ineligible last year, is right now probably the safest bet, given SAG-AFTRA’s affinity for repeat winners, she might have to fend off internal competition this time around. As of this writing, only one of her co-stars has cracked the top five in our odds: Reese Witherspoon, who sits in fifth place. But don’t underestimate the former queen of the SAG Awards herself, Julianna Margulies, who joined the second season of the Apple TV+ series as UBA anchor Laura Peterson and is just outside the top five in sixth place.

There have been only four instances in which the eventual SAG Award champ overcame internal competition in this category: Edie Falco twice for “The Sopranos” in 2000 and ’03; Allison Janney for “The West Wing” in 2002; and Anderson for “The Crown”. Of those, two saw the winner overcome multiple co-stars: Falco over Lorraine Bracco and Nancy Marchand in 2000, and Anderson over Colman and Emma Corrin. What’s more, Janney, Falco in 2003 and Anderson might have all benefited from not being the only ones in their category facing internal competition — both Falco and Bracco were nominated for “The Sopranos” in 2002, Janney and Lily Tomlin for “The West Wing” in ’03, and Julia Garner and Laura Linney for “Ozark” this past year. Should multiple “Morning Show” women get nominated, they could cancel each other out, possibly allowing Moss to come down the middle and snatch the win.

But after three straight losses for “Handmaid’s,” you might be wondering, “Well, why now?” Moss wouldn’t be the first actor who had to wait their turn. Peter Dinklage earned his first solo victory on his sixth TV drama actor nomination for the final season of “Game of Thrones” in 2020, at which point he had already scooped up four Emmys for his fan-favorite turn on the HBO behemoth. Dinklage, whose only other SAG Award win was as part of the “Three Billboards Outside Ebbing, Missouri” (2017) ensemble, has a total of 16 bids under his belt. Moss — who has also reaped an additional four citations for “Mad Men” (2008, ’11, ’13, ’16) and three for “Handmaid’s” (2018-20) as part of their respective ensembles — is forecasted to bring her total to 17 with “Handmaid’s” projected to land its fourth straight drama ensemble nom, per our odds, where it sits in second place. And given that “Thrones” hadn’t won a single SAG Award for acting (it went 8 for 8 in stunt ensemble) prior to Dinklage’s win, the fact that “Handmaid’s” hasn’t either so far might not necessarily hurt Moss.

The similarities don’t end there. Dinklage, too, might have capitalized on a “Morning Show” vote-split as both Steve Carell and Billy Crudup, last year’s Critics Choice and Emmy champ, were nominated for the series (“This Is Us'” Sterling K. Brown and “Stranger Things'” David Harbour rounded out the lineup). Sure, Moss neither has four Emmys for her “Handmaid’s” role nor the advantage of competing for her show’s final season, but she could similarly benefit from a combo of being overdue and the lineup breaking her way. Plus, “Handmaid’s” just scored its 10 acting Emmy noms for its fourth season, its most in a single year, in which Moss gives a killer, arguably series-best turn. And while the TV academy’s acting branch makes up only a fraction of SAG-AFTRA’s membership, its continued backing of “Handmaid’s” might indicate that four years in, there’s still love for the series among actors.

Rounding out the top five in our odds are two first-time hopefuls, “Succession’s” Sarah Snook in second place and “Pose’s” Mj Rodriguez in fourth.