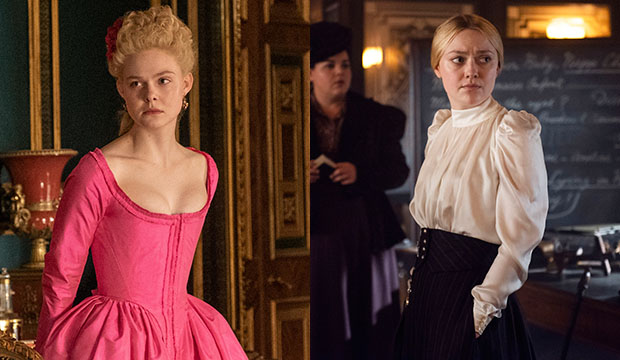 Huzzah! Sisters Elle Fanning and Dakota Fanning could both finally earn their inaugural Golden Globe Award nominations this year — the former in Best TV Comedy Actress for Hulu’s “The Great” and the latter in Best TV Drama Actress for TNT’s “The Alienist: Angel of Darkness.”

As of this writing, Elle sits in second place in our odds for comedy actress, which is hardly a surprise. Given the Hollywood Foreign Press Association members’ affinity for actors portraying real life people, Elle’s turn as Catherine the Great should be right up its alley. In fact, just last year, the Globes nominated Helen Mirren for playing the same role in the HBO miniseries “Catherine the Great.” And while you could argue that the HFPA might not want to recognize this role back to back, Elle’s unique spin on Russia’s longest-serving female ruler could win them over.

What’s more, HFPA members heavily favor debut-season shows, particularly when they can be the first ones to plant their flag in one. OK, yes, “The Great” — which dropped on May 15 — has already earned Emmy bids for writing and directing, and Elle has snagged Television Critics Association and Independent Spirit Awards mentions for it, but the Globes could still be the first group to give the series and the actress their big moments in the limelight. It only helps Elle that the series is expected to be a strong player overall, with our odds forecasting two additional citations for it: comedy series (third place) and comedy actor for Nicholas Hoult (fifth place).

Dakota, on the other hand, is currently in 19th place in our odds for drama actress — but it wouldn’t be the first time our racetrack odds underestimated “The Alienist.” When it competed as a limited series for its first season, it scooped up two Globe noms for series and actor (Daniel Brühl), neither of which our odds projected (the series was in 16th place; Brühl, 17th). Like its prequel, “The Alienist: Angel of Darkness” could benefit from the HFPA’s tendency to spread the wealth, and it, based on its prior citations, being the most likely place for members to acknowledge TNT.

After competing in the uber crowded catch-all supporting actress category for the first season, Dakota has made the jump to drama actress, which is a fairly wide-open field this year. The first season’s lead, Brühl, hands over the reins to Dakota in the second one, in which she reprises her role as Sara Howard, an intelligent, fearless detective and the first woman to be hired by the NYPD. As Sara sets up her own private agency — which investigates cases brought by primarily women — and chases after a grizzly child kidnapper/killer, Dakota gets to sit in the driver’s seat and have her full range on display. If any actor from the second season is recognized, it’s likely to (and should) be her, especially since Globe voters tend to not repeat themselves.

In the case of both sisters, it’s also arguably their time. Of the two, Dakota is the only one to have already snagged a major individual  award nomination, but that was 19 years ago for the 2001 film “I Am Sam” in supporting actress at the Screen Actors Guild Awards. Otherwise, both she and her sister do have a collection of SAG ensemble and Best Young Actor/Actress Critics’ Choice Award bids or wins, but Globe noms would icing on the cake for their many years of work. To that end, HFPA members might not want to pass up the opportunity to check off both of them, especially if they can do so at the same time. Plus, don’t forget: they are suckers for people from famous families.