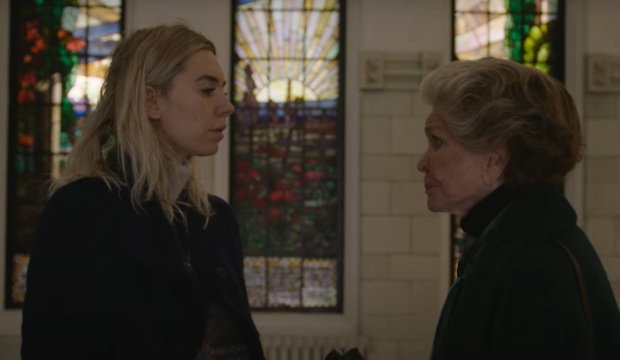 Since the last of her six Oscar nominations in 2001, Ellen Burstyn has kept busy. Her television work has earned her six Emmy nominations and with the first of her two wins (in 2009 for a guest spot on “Law & Order: SVU”) she completed the Triple Crown of Acting. Back in 1975, she took home both a Tony (for “Same Time, Next Year”) and an Oscar (for “Alice Doesn’t Live Here Anymore”).

Over the years, Burstyn has continuously nurtured her theatre roots and served as the president of both the Actors’ Equity Association and the Actors Studio. On the film side, although she has added over 30 credits to her resume over the past two decades, none of them have been noticed by Oscar voters. Even so, Burstyn is no stranger to long waiting periods (there was a 20-year gap between her Oscar bids in 1981 and 2001). Her patience and work ethic have paid off, as her chance at a seventh nomination (and a second win) has finally come with the Netflix release “Pieces of a Woman.”

Burstyn plays the small but significant role of Elizabeth, who pushes her daughter, Martha (Vanessa Kirby), to come to terms with and seek justice for the death of her newborn baby. Elizabeth is established as a poised, financially comfortable woman who is willing to assist her two daughters when necessary, but will always insert a stern lecture. After the loss of her grandchild, it becomes clear that she is quite self-assertive and generally unsympathetic when it comes to negligence and mindsets that conflict with her own. Still, the deep love she has for her children is always evident, as is her fervent wish for them to have the best possible lives.

Most of Burstyn’s performance is contained in a 20-minute sequence of scenes in the film’s third quarter. In a stirring monologue, Elizabeth describes her tragic childhood and how it and her mother’s teachings shaped her pitiless attitude. David Fear (Rolling Stone) calls the moment a “show-stopping turn in miniature” and says that “to observe [her] is to observe the power of acting.” Indeed, Burstyn has been honing her craft for over 60 years, and she perfectly showcases her masterful abilities with this complex supporting role. If she wins, she will be added to the list of veteran actors who were honored in the supporting categories late in their careers, including Peggy Ashcroft, Alan Arkin, and Christopher Plummer.

Five of her six Oscar nominations (including her win) have come for playing mothers, as have her last five Emmy nominations. Though she has recently specialized in creating tough matriarchal characters in various projects, Elizabeth is one of the most complicated and tough-loving mothers she has ever played. She deftly creates a fresh variation of her signature type of character. As Anthony Lane (The New Yorker) observes, she “create an unforgettable impression” with this role.

With her lucky seventh bid, Burstyn would number among the 12 most-nominated actresses in Oscar history. She garnered her first five nominations between the ages of 39 and 48, and then waited 20 years for a sixth, for 2000’s “Requiem for a Dream.” Now that another 20 years have passed, it appears that she found just the right role to regain the academy’s attention.

Currently, Amanda Seyfried (“Mank”) leads our Best Supporting Actress race with 19/5 odds, followed by Olivia Colman (“The Father”) with 4/1 odds. Burstyn sits at third place with 5/1 odds, which bodes well for her nomination prospects. If she reaches that achievement, she may have a strong enough narrative to pull off a win. Scoring Oscar gold at age 88 would be a record-breaking feat.