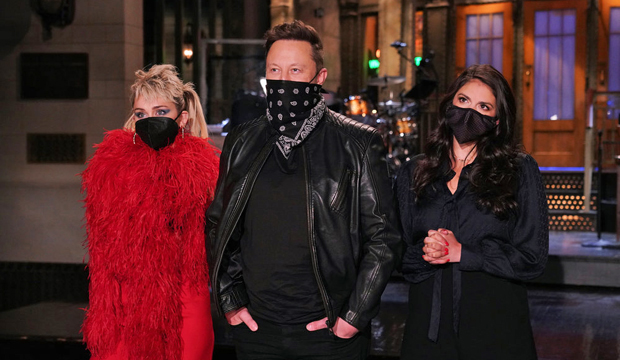 While the idea of Elon Musk hosting “Saturday Night Live” seemed hard to believe at first, the billionaire mogul did indeed helm tonight’s episode, with musical guest Miley Cyrus. For the requisite opening monologue, Musk started off by insisting it was an honor to be hosting “SNL,” and he meant it, despite not showing much enthusiasm. After all, he confessed that he tends to not have much “intonational variation” when he speaks. He noted that he was actually the first person with Asperger’s to host the sketch series.

SEEWill Bowen Yang be the next ‘SNL’ breakout at the Emmys?

After sincerely espousing his desire for a “renewable energy future” and “a multiplanetary space-bearing civilization,” he observed that he tends to post strange tweets like “69 days after 4/20 again haha.” Though, as he noted, he’s sending people to Mars on a rocketship so he can hardly be expected to be a “chill, normal dude.” Musk then pointed out that after smoking weed on Joe Rogan‘s podcast once, everyone said he goes around smoking weed on podcasts. “It’s like reducing O.J. Simpson to ‘murderer,'” Musk quipped.

The billionaire also poked fun at his son’s name, “X Æ A-Xii,” which he compared to a “cat running across the keyboard.” Speaking of family, Musk’s mother, Maye, joined him onstage in honor of Mother’s Day. She then regaled the audience with stories about her son’s childhood and placated him about his theory that we’re all living in a simulation.

News of Musk hosting “SNL” has been controversial since it was announced. In recent years, the mogul has expressed provocative opinions on the COVID-19 pandemic, gender pronouns and more, leading various media sites and commentators to question the decision to have him host. Others simply expressed confusion as to why someone like Musk would host the show when a vast majority of hosts come from the world of entertainment or sports. It remains to be seen if the sheer novelty of Musk hosting will lead to high ratings for “SNL” or if the gamble fails to pay off.