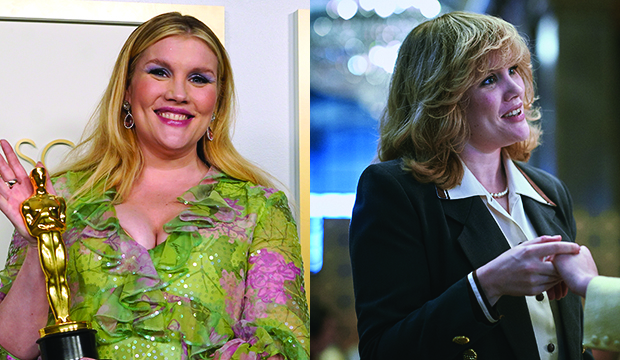 Fresh off her Best Original Screenplay Oscar victory for “Promising Young Woman,” Emerald Fennell can now look to the next leg of her EGOT: Emmy. The newly minted Oscar champ is in contention for Best Drama Supporting Actress for her performance as Camilla Parker Bowles in the fourth season of “The Crown.”

In the early combined odds, Fennell is currently in 11th place, three spots out of the predicted field of eight, which is topped by her co-star Gillian Anderson, who has already pocketed the Golden Globe, Critics Choice and Screen Actors Guild Award for her turn as Margaret Thatcher. But with a wide-open field and six of last year’s eight nominees ineligible, there’s certainly room for Fennell to grab a spot.

But Fennell’s path would be most akin to that of Taika Waititi, another writer/director/producer/actor who won an Oscar for a bold script. Waititi scored Oscar gold last year in Best Adapted Screenplay for “Jojo Rabbit” and then earned two Emmy nominations: Best Voice-Over Performance for “The Mandalorian” and as a producer on Best Comedy Series nominee “What We Do in the Shadows,” which is based on his 2014 mockumentary horror comedy of the same name.

Those were Waititi’s first two Emmy nominations — he lost to Maya Rudolph for “Big Mouth” and “Shadows” fell to “Schitt’s Creek” — and Fennell has a leg up in that regard. She’s already a two-time Emmy nominee for her work on the second season of “Killing Eve,” on which she served as showrunner, having nabbed bids in 2019 for Best Drama Series and Best Drama Writing. Fennell was actually the odds-on favorite to win writing, but “Succession’s” Season 1 finale, penned by Jesse Armstrong, prevailed, while “Killing Eve” lost the top award to the final season of “Game of Thrones.” But this just means Emmy voters are already familiar with her — not to mention TV fans in general as she starred on the BBC drama “Call the Midwife” before going behind the camera for “Killing Eve.”

Fennell hasn’t yet been individually singled out for “The Crown” by an awards group (she did win the drama ensemble SAG Award as part of the cast), but that means little for her Emmy chances when voters have unlimited nominating slots and the supporting lineups have eight spots. We’ve seen over the years that Emmy voters are happy to check off multiple actors from their favorite shows down the ballot. Two years ago, “Game of Thrones” took up four slots in drama supporting actress and three in supporting actor. Last year, “Succession” produced three drama supporting supporting actor nominees, most surprisingly for Cousin Greg himself, Nicholas Braun, and a whopping nine acting nominations overall after not getting a single one for its actors for its first season. After sweeping the winter awards, “The Crown” could similarly max out on nominations in general, not just in acting, with its winning momentum and the dearth of competition, so we could soon be seeing Oscar winner and three-time Emmy nominee Emerald Fennell.