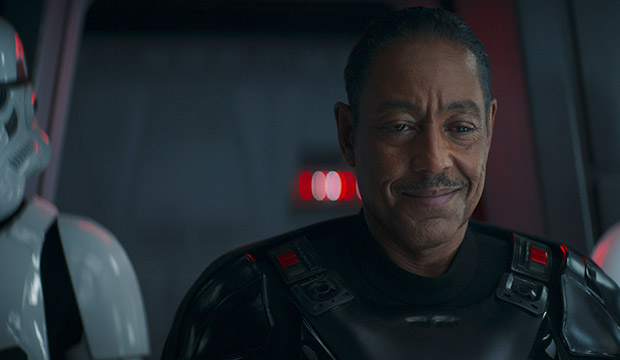 You know the handshake meme? Giancarlo Esposito and Jonathan Banks can do that now — and not just because they’re “Breaking Bad” and “Better Call Saul” co-stars. Esposito earned a Best Drama Supporting Actor Emmy nomination on Tuesday for “The Mandalorian,” making him just the second person after Banks to be nominated for three different shows in the category.

Esposito scored his first bid in 2012 for playing Gus Fring on “Breaking Bad,” losing to co-star Aaron Paul. It’d be seven years before he would return to the category, for reprising his role as everyone’s favorite drug kingpin/fried chicken chain restaurant owner on the Emmy winner’s prequel spin-off “Better Call Saul,” but he lost this time to Peter Dinklage (“Game of Thrones”). He was nominated last year as well, falling to “The Morning Show” star Billy Crudup.

Like Esposito, Banks has also been nominated for playing the same character on two shows — and the same shows at that. Banks has actually set two records in the drama supporting actor category already. First nominated in 1989 for “Wiseguy,” he became the first person to nab bids for two different shows when he was shortlisted in 2013 for playing Mike Erhmantraut on “Breaking Bad.” And when he got nominated for reprising the role of the curmudgeonly fixer on “Better Call Saul” in 2015, he became the first and until now only person to be nominated for three different shows. He’s received three more nominations for “Better Call Saul” — he was shockingly snubbed last year — but has yet to win.

Now a five-time nominee, Esposito is also searching for his first statuette. He was expected to earn a nomination for playing the villainous Moff Gideon on “The Mandalorian,” sitting in fifth place in the odds, after surprisingly garnering a bid in the guest actor category last year as one of the Disney+ series’ 15 nominations.