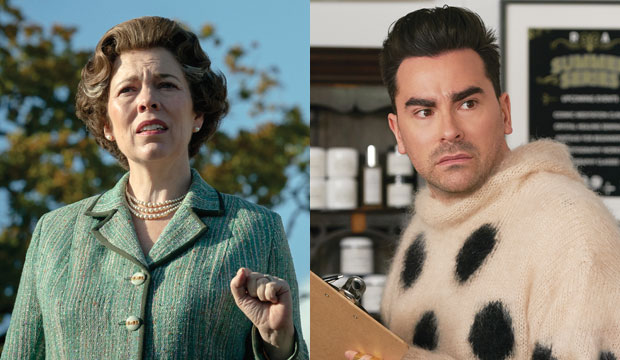 There has never been more good TV than there is in 2021. But fewer TV shows are getting credit for it. At the 2021 Primetime Emmy Awards ceremony, “The Crown” pulled off a clean sweep of its seven drama categories and the comedy races split between just two shows (“Ted Lasso” and “Hacks”). How did this happen?

For years the Emmys decided their winners through a unique judging system where small juries of academy members would view sample episodes and rank them. That system resulted in a number of baffling upsets, but also several gratifying wins for shows that might have flown under the radar due to lower ratings or limited name-recognition. “Breaking Bad,” for instance, owes much of its success in early seasons to that judging system: before the show was a phenomenon, it was airing in the shadow of fellow AMC drama “Mad Men,” but the quality of its episode submissions made Bryan Cranston and Aaron Paul into Emmy darlings. And it’s easy to forget that “Everybody Loves Raymond” also struggled for ratings and recognition in its early years, but was undeniable when voters nominated it and watched their submissions.

But then in 2015 the Emmys made a big change: instead of small juries watching sample episodes, every member of the academy could vote in every category within their branch. That meant, for instance, that a member of the TV academy actors branch could vote in every single acting category, plus the top program categories. Inevitably, that reduced the likelihood that voters would be able to watch all of the submitted material before marking their ballots. And in 2016 the ranking system went away and voters then only had to pick one nominee — most votes wins. For a while that seemed to be working. We’ve gotten unique, varied winners like Tatiana Maslany (“Orphan Black”), Rami Malek (“Mr. Robot”) and Zendaya (“Euphoria”).

However, we’ve also been getting more and more sweeps. It used to be rare for a program to rack up double-digit win totals, but now it’s commonplace. “Game of Thrones” won 12 awards for three seasons in a row. “Chernobyl” won 10. “Watchmen” won 10. And this year both “The Crown” and “The Queen’s Gambit” won 11. “Schitt’s Creek” swept all seven of its prime time ceremony awards in 2020: Best Comedy Series, both lead acting categories, both supporting categories, and both writing and directing. That had never happened before, but it seemed to make sense at the time: it took Emmy voters six years to catch on to the show, so they made up for lost time by awarding it across the board for its final season.

But it just happened for the second year in a row with “The Crown” achieving that feat in the drama field despite that show having been awarded in the past and having opportunities to be awarded again in the future. And “Ted Lasso” and “Hacks” divvied up all of the top comedy prizes.

How does that happen in an era with more high-quality television than ever before? My theory is that peak TV has splintered viewership so much that only a few of the most high-profile shows are able to reach a critical mass of voters. Everybody is watching a different set of shows, so if there’s one show on everybody’s list — as “The Crown” probably was this year — and there’s no mechanism to ensure voters watch the rest of the eligible or nominated material, that one show will win disproportionately. Everything else is too niche.

Should the Emmys go back to small juries sitting in conference rooms watching all the episode submissions? Not necessarily. I never thought I’d say this, but the Emmys should be more like the Grammys. The recording academy had its own problematic jury system that has since been done away with, but where I think the Grammys get it right is in limiting the number of categories academy members can vote in, which might incentivize them to select the categories they’re more knowledgeable in.

The Emmys used to enforce such limits before 2015 under the jury system, and there are a number of ways you could reinstate limits. For instance, whatever system you devise would need to create a relatively even spread of voters across categories so they don’t just flock to the highest-profile races. That might happen now anyway with voters allowed to but not obligated to vote in all eligible categories for their branch. But regardless of the specific fix, something’s got to give. I’ve long admired the Emmys for their willingness to evolve their system as the industry has changed, especially in recent years as streaming has transformed the way people produce and consume TV. They need to do it again.