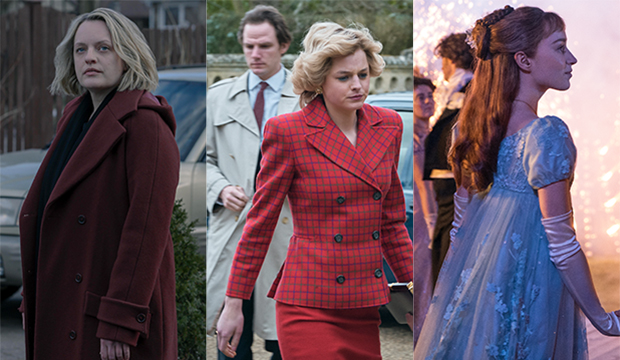 In 2017, “The Handmaid’s Tale” director Reed Morano ended a 22-year dry spell when she became the only the third woman to win the Best Drama Directing Emmy. A woman has not won since, but this year, three have a chance to become the fourth.

Liz Garbus (“The Handmaid’s Tale”), Jessica Hobbs (“The Crown”) and Julie Anne Robinson (“Bridgerton”) are up for the honor alongside Steven Canals (“Pose”), Benjamin Caron (“The Crown”) and Jon Favreau (“The Mandalorian”). If Garbus, Hobbs or Robinson wins, they’ll join Morano, Karen Arthur (“Cagney & Lacey,” 1985) and Mimi Leder (“ER,” 1995) as the category’s only female champs.

This is the second straight year with three female drama directing nominees. Leder was nominated last year for “The Morning Show” alongside Hobbs for “The Crown” and Lesli Linka Glatter for “Homeland,” but they lost to Andrij Parekh for “Succession.”

SEE Can Elisabeth Moss return the favor to ‘The Crown’ and take home another Emmy for ‘The Handmaid’s Tale’?

At the moment, none of Garbus, Hobbs or Robinson are predicted to win. Caron is in first place in the odds for helming “Fairytale” from the royal drama, the third episode of Season 4 that depicts the wedding of Prince Charles (Josh O’Connor) and Princess Diana (Emma Corrin) and the latter adjusting to her new life. Garbus is in second place for directing “The Wilderness,” the fourth season finale of “Handmaid’s.” Favreau is in third for “Chapter 9: The Marshal” (“The Mandalorian’s” Season 2 opener), followed by Hobbs for “War” (“The Crown’s” season finale), Canals for “Pose’s” “Series Finale” and Robinson for “Bridgerton’s” pilot “Diamond of the First Water.”

But the directing branch has surprised us the past few years, so don’t think this is a done deal for Caron yet. The odds-on frontrunner has not won this category since Morano. In 2018, “Handmaid’s” was predicted to win again, but Stephen Daldry, who was in fourth place in the odds, pulled off an upset for “The Crown” on what turned out to be a bad night for “Handmaid’s” as it got goose-egged. In 2019, Jason Bateman was as stunned as anyone when he won for “Ozark.” He was in sixth place out of seven, with “Game of Thrones'” series finale in first. And last year, “Succession” was predicted to prevail — but for Mark Mylod for the Season 2 finale. Instead, Parekh, who was in fourth place, trumped his colleague with “Hunting,” aka the “boar on the floor” hour.

Will the upset trend continue? “The Crown” is the only show in the lineup with multiple bids, so there could be a “Succession”-esque scenario where the drama series frontrunner takes directing but not for the episode everyone expects. Or it could vote-split itself out of a win (“Succession’s” top rivals last year, “Ozark” and “The Crown,” also had double directing bids), paving the way for a single nominee — and perhaps a woman — to triumph.

Emmy odds for Best Drama Directing
'The Crown' is ahead