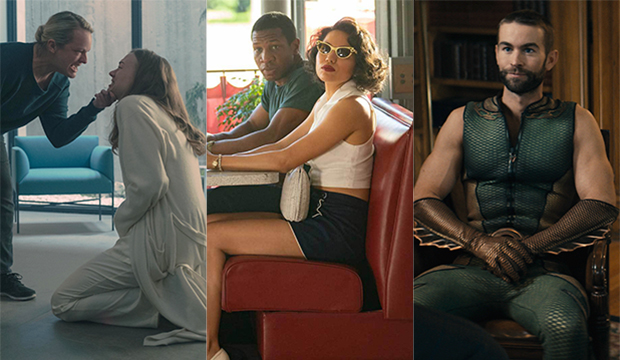 Like the Emmys’ Best Drama Directing category, there have not been a lot of individual female winners in Best Drama Writing. Only five solo women have ever won before — slightly better than the three female drama directing champs — but just like the directing race this year, there are three chances for another woman to join the drama writing winner’s circle.

Yahlin Chang (“Home” from “The Handmaid’s Tale“), Misha Green (“Sundown” from “Lovecraft Country”) and Rebecca Sonnenshine (“What I Know” from “The Boys”) are all individually nominated this year for their scripts. There are other two female nominees, Janet Mock and Our Lady J, but they share their bid for the “Pose” series finale with co-writers Ryan Murphy, Brad Falchuck and Steve Canals. The other nominees are solo dudes: Peter Morgan (“War” from “The Crown”), Jon Favreau (“Chapter 16: The Rescue” from “The Mandalorian”) and Dave Filoni (“Chapter 13: The Jedi” from “The Mandalorian”).

Best Drama Writing was first given out in 1955 at the 7th Primetime Emmy Awards and unsurprisingly it has long leaned male. It took 19 years before an individual woman won: Joanna Lee for “The Waltons” in 1974. In 1979, Michele Gallery (“Lou Grant”) became the second, followed by Patricia Green (“Cagney & Lacey”) in 1985 and Ann Biderman (“NYPD Blue”) in 1994. And then it was a 20-year drought before Moira Walley-Beckett won for “Breaking Bad’s” seminal “Ozymandias” in 2014.

SEE Watch our interviews with the ‘Lovecraft Country’ cast and crew

Other women have won as part of writing teams with men. An all-female writing team has never prevailed. Terry Louise Fletcher and Steven Bochco struck gold in 1987 for “L.A. Law.” Diane Frolov and Andrew Schneider triumphed for “Northern Exposure” in 1992. “The Sopranos” writer Robin Green has two victories: in 2001 with Mitchell Burgess, and in 2003 with Burgess and David Chase. “Mad Men” scribes Kater Gordon and Erin Levy won their respective awards in 2009 and ’10 with creator Matthew Weiner.

Currently, Morgan is predicted to win, which makes sense since “The Crown” is the series frontrunner. Since 2015, drama writing and series have gone to the same show all but twice: in 2018, when “The Americans took writing and series went to “Game of Thrones,” and 2019, with “Succession winning the first of two consecutive writing statuettes and “Game of Thrones” nabbing its fourth series Emmy. “War” is also one of two nominees, the other being “Pose’s” “Series Finale,” that is also nominated in directing (“Handmaid’s” and “The Mandalorian” have other episodes up for directing). The “Pose” crew is in second place, followed by Chang, Filoni, Sonnenshine, Green and Favreau.

Of Chang, Green and Sonnenshine, Chang is arguably the best positioned to become the sixth solo female champ, not just because she’s third in the odds, but because “Handmaid’s” is the strongest of those three shows and surprised with 21 nominations. The Hulu drama has also won this category before, for its pilot, en route to winning series in 2017. “Lovecraft,” which was canceled after one season, scored 18 bids, while Season 2 of “The Boys” amassed five nominations. All three are nominated for series, and if there is a series/writing split this year, the stronger series contender — in this case, “Handmaids,” which is in third — would likely benefit. Not to mention, “Handmaid’s” is also the most recent of the three with a buzzy, resurgent fourth season.

Emmy odds for Best Drama Writing
'The Crown' is the favorite