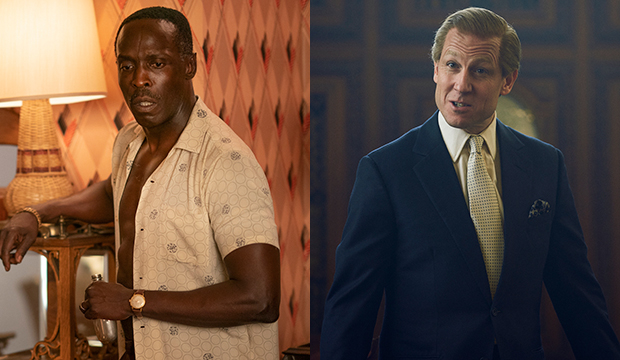 Welcome to Emmy Experts Typing, a weekly column in which Gold Derby editors and Experts Joyce Eng and Christopher Rosen discuss the Emmy race — via Slack, of course. This week, we look at one drama category that feels up in the air.

Christopher Rosen: Hello, Joyce! It’s dangerously hot here on the East Coast and we’re less than a week away from the start of final Emmy voting, so what better time than now to talk about one of this year’s closest races: Best Supporting Actor in a Drama Series. While our experts have Michael K. Williams somewhat comfortably ahead, the odds are much tighter between him and “The Crown” star Tobias Menzies. I can’t say I’m surprised: I’ve actually got Menzies winning here, a result that could potentially give “The Crown” a sweep of the acting categories with Emma Corrin, Josh O’Connor and Gillian Anderson all heavily favored to win as well. (Of course, me being me, I have Billy Porter beating O’Connor — I do what I want!) All things being equal, I actually think Menzies has a legitimate grasp on this category: he was great as Prince Philip in the fourth season and his episode, “Gold Stick,” highlights the character’s especially persnickety demeanor. But what do you think? Will Menzies help “The Crown” pull a “Schitt’s Creek” or is Williams, an acting legend who has never won an Emmy before, the safer pick even if his role on “Lovecraft Country” isn’t as memorable as his previous work?

joyceeng: I’m so glad you asked because this is one of the few categories that can offer a surprise. No offense to Menzies or MKW, but if either wins, I’d be like 🥱. They’d both be deserving winners, but neither would be a shocker and I want excitement! So many of these races are a done deal and the ceremony just feels like a formality at this point. That’s partially why I have Giancarlo Esposito in first. Sure, that’s just a glorified cameo, and do I truly believe he can win? Not really, but I think this race is open enough and he has enough goodwill, despite the fact that he’s never won before, and “The Mandalorian” is big enough that he can do this. I might drop him by Sept. 19, but let’s have some fun for now. I’ve mentioned this before, but I feel like everyone wants MKW to win an Emmy (I do too!) and they predict him but then he doesn’t win. I do think this is his best shot out of his four acting nominations. Menzies can obviously get swept up if “The Crown” goes over that massively, but do we really foresee another show going 7/7 for the second year in a row?

SEE Emmy Experts Typing: Will ‘Saturday Night Live’ have the last laugh in the acting races?

Christopher Rosen: As mentioned, I actually don’t. We’ve talked about this here and there but I think O’Connor is a weak frontrunner and the specter of former winner Billy Porter is strong. But at the moment, that still leaves me with three winners from “The Crown,” so not the “Schitt’s” sweep the future best drama winner might expect. But let’s talk about Esposito. You’re right: it’s a glorified cameo and he really isn’t required to do a lot of heavy lifting. (There isn’t a lot of nuance in that Moff.) But I wonder, absent a lockdown Williams performance and with Menzies possibly whiffing on his submission (the fourth season of “The Crown” ends with a great Phillip monologue to Diana that really ties the whole show and his performance together; I know Phillip isn’t the focus of the finale but that scene alone might have been worth it), does Esposito have enough — especially because “The Mandalorian” remains a solid runner-up choice to the monarchy?

joyceeng: Ironically, he probably would’ve had a better chance in guest, where he was nominated last year. That category is very weak this year and the reigning champ, Ron Cephas Jones, didn’t even submit. It’s also funny that this is the second year in a row in which Esposito made the supporting actor lineup without the, um, heftiest of parts — he can do no wrong in my book, but there are at least four “Better Call Saul” actors I would’ve nominated before him last year. I’m not gonna say he can win this on name-check, but he is racking up these nominations pretty easily. But there are five other dudes here, including three from “The Handmaid’s Tale.” Lots of people were upset last year when O.T. Fagbenle was snubbed. But is he doomed to vote-split with Bradley Whitford, a former champ for this show in guest, and fellow first-time nominee Max Minghella? And then there’s six-time champ John Lithgow, who, lest we forget, won “The Crown’s” very first acting Emmy, and Chris Sullivan, who is now the third most nominated “This Is Us” regular cast member. Who would’ve thought? Do you see any of them upsetting?

Christopher Rosen: I’ve kind of brushed aside the “Handmaid’s Tale” guys because it seems like a long shot to expect one of them to pop above the others. So what you’re asking is if I think John Lithgow or Chris Sullivan can pull off an absolute unlikely upset. No? But can I imagine a world with Lithgow somehow ends up winning? Yes, of course. Like we’ve been saying, no one here is a slam dunk — there’s no Jason Sudeikis among the nominees. So if it comes down to a scrum, does Lithgow emerge? Again, probably not — if a “Perry Mason” falls onto HBO Max, does it make any noise? — but we can hope! Last thoughts here before we head out?

joyceeng: Maybe — maybe — people will see John Lithgow’s name on the ballot and after having already voted for some other stars of “The Crown,” they fondly remember his tremendous turn as Winston Churchill and mark him off too. I kid, I kid (sort of). I will say that if there isn’t overwhelming passion for any of these performances that someone like Lithgow, with his stature and bona fides, could rise above the rest. But really, all I want is for them to surprise me. Put some drama into drama supporting actor!