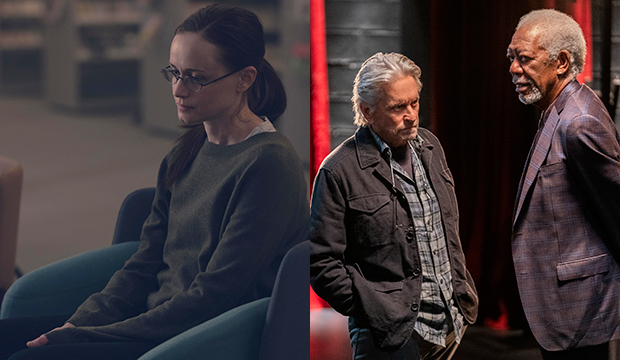 Welcome to Emmy Experts Typing, a weekly column in which Gold Derby editors and Experts Joyce Eng and Christopher Rosen discuss the Emmy race — via Slack, of course. This week, we look at the guest races that often have a surprise or two up their sleeves.

Christopher Rosen: Hello, Joyce! We’ve reached the beginning of the end: Emmy voting is underway *right now* and we’ve already discussed who we’d vote for if the Television Academy wised up and included us among the membership. Alas, maybe next life. For now, we’re left to typing and it feels like a good time to take one last look at those highly competitive, star-packed guest actor and actress categories. On the drama side, I’ve had Mckenna Grace holding firm as the winner — even in the face of past champ and fellow “The Handmaid’s Tale” star Alexis Bledel as well as former Best Drama Actress winner Claire Foy. I just think the buzz on her performance has been so strong throughout this season — but maybe I’m confusing YouTube views with an actual path to victory. For actor, meanwhile, I’ve switched to your boy, Timothy Olyphant. Confession: I actually didn’t think he was all that jazz on “The Mandalorian,” but I also can’t think of a good reason to bet against this victory. “The Mandalorian” was a big Emmy favorite this year and he was definitely more memorable in his episode than Charles Dance was on “The Crown” (though no offense to Mr. Dance, the winner of the Gold Derby Award in this category). What do you think, Joyce? Do you agree with my picks or have you got some other contenders in mind?

joyceeng: Wow, I’m gonna tell TV’s best lawman that you didn’t think he was that great. I also have the same two picks, but I’ve been contemplating switching back to Bledel lately. I had her in first until Grace snagged the nom, which was the biggest hurdle for her. But now I’m debating whether Grace feels more like a distant memory than we think. Her big episode was the premiere and while she still has some buzz, I don’t think it’s at the same level as when Bledel had sustained buzz throughout the first season en route to her win. I also feel like Bledel could be the Ron Cephas Jones here. Both have been semi-regulars on their shows, both have been nominated in supporting and won in guest, and Bledel could prevail again in a similar way he did last year for “This Is Us.” He was in fifth place in the odds, but voters were just apathetic about the other nominees/performances and so they went back to a familiar face they like and had awarded before. Drama guest actress has some high-profile names, but it’s not super competitive, and we know how easily they name-check in the guest categories. Speaking of name-checks, Foy is also right there and they’ve awarded her before for the show that will likely take series. What do you think? Is Alexis Bledel the next Ron Cephas Jones?

SEE Emmy Experts Typing: Will Michael K. Williams (or someone else) spoil ‘The Crown’s’ crowning moment?

Christopher Rosen: You make a strong case for that very much coming true. I wouldn’t be surprised if it happens, if only because I wonder how much thought voters actually put into these categories. Like you said, Bledel has won before and is basically a “Handmaid’s Tale” regular. Maybe she’s just going to coast and we’ll look back at all the other options and wonder how we thought the outcome could be any different. What about comedy? I’ve had Maya Rudolph at the top since the nominations were announced, but Jane Adams seems incredibly likely to upset, no? “Hacks” remains a favorite and I wonder if her respected, understated turn as Ava’s mother on the show — a comedy role with lots of drama attached — will push her over the top on a wave of “Hacks” love. Meanwhile on the actors’ side, Dave Chappelle is there just waiting to win again, but I’m also like Meryl Streep in “Doubt” about him. I have such doubts! Will the “SNL” nominees, four strong, knock each other out and pave the way for Morgan Freeman to win?

joyceeng: It’s totally a vote-split waiting to happen. That’s another category where it feels like it’s full of apathy — I mean, they defaulted to four “SNL” guys, including Alec Baldwin like it’s 2017. If it is 2017 again then Chappelle has this on lock. But this is an ideal situation for Freeman to win his first Emmy, not mention he’d fall under the name-check category as well. Comedy guest actress is the one of the four I’m most confident in. Rudolph had more material this year and actually hosted an episode, but I do have Adams in second. The acting branch is clearly into “Hacks” since it got double the nominations we expected, but I don’t know if she’s strong enough to topple the Kamala Harris of it all. There’s usually at least one guest winner every year who’s a total surprise, if you go by the odds at least, like RCJ last year. Who do you think that could be this year?

SEE Emmy Experts Typing: Will ‘Saturday Night Live’ have the last laugh in the acting races?

Christopher Rosen: You made the strong case for Bledel earlier, but I honestly think it’s Adams! (I know, I know.) Maya Rudolph is amazing and she’s the defending champion, but was her work this year all that much different than last? I’d argue no. That doesn’t mean voters will pay attention — as you said, she could just be an easy name-check — but I think there’s room for an Adams upset. Who’s your no guts-no glory pick before we head into the weekend?

joyceeng: You know what? I’m gonna go with my other guy, Don Cheadle, for walking around in a museum for less than two minutes on “The Falcon and The Winter Soldier.” He’s been around forever, they obviously like him (this is his 11th nomination and he’s never won), and he would hardly be the first big name to win a guest trophy for a blink-and-you’ll-miss-it cameo (Margo Martindale and her coffee say hi). He was good-natured about the nomination and just went viral again with that Kevin Hart clip. An absolutely incredible “campaign.” Damn.