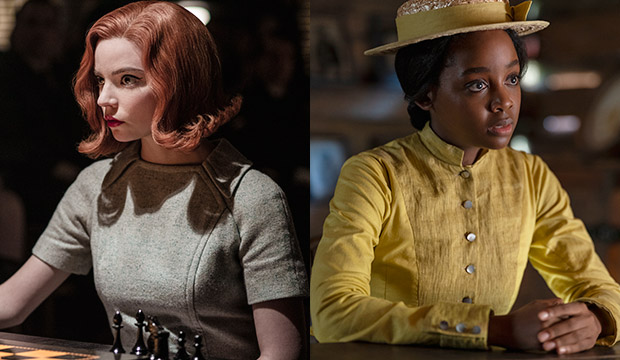 Welcome to Emmy Experts Typing, a weekly column in which Gold Derby editors and Experts Joyce Eng and Christopher Rosen discuss the Emmy race — via Slack, of course. This week, with nomination voting commencing, we look at the shows vying for the five spots in Best Limited Series.

Christopher Rosen: Hello, Joyce! We’re back in front of our keyboards and, like the Bernie meme, I’m once again asking you about the Best Limited Series categories at the Emmy Awards. This time, though, let’s focus on the whole enchilada: the main category itself where there are roughly 137 shows in serious competition for one of the five slots. (Don’t check my math on that one, it’s spotless!!) At the moment, our Gold Derby odds have the category shaping up like this: “The Queen’s Gambit,” “I May Destroy You,” “The Underground Railroad,” “Mare of Easttown” and “WandaVision.” That’s the five I have predicted, leaving worthy contenders such as “Small Axe,” “It’s a Sin,” “The Undoing,” “Genius: Aretha,” “Fargo,” “The Good Lord Bird,” “Halston” and “The Haunting of Bly Manor” on the outside. But are the chalk predictions a bit vulnerable? Even faced with the surging “Mare of Easttown,” I think most expect this category will ultimately go to “The Queen’s Gambit.” But will the nominees throw us a curveball? What do you think? And not to lead the witness too much, but should we be worried about Barry Jenkins‘ “The Underground Railroad”?

joyceeng: Limited series is the Olympic swim trials of the Emmys (and I’m not just saying this because trials are happening this week): There’s a loaded field but only the top two (five) make it and everyone else goes home shattered thinking about all the work they’ve put in the last quadrennium. Limited series is brutal, especially when drama and comedy series are at a locked eight spots. No matter which way you cut it, there’ll be a notable snub or two here. I have the same top five. I think “The Queen’s Gambit,” “Mare of Easttown” and “I May Destroy You” are safe, and even though Marvel is an unknown quantity at the Emmys, I think the inventiveness of “WandaVision” will help push it through, but I wouldn’t be shocked at all if it doesn’t make it. And that leaves us with “The Underground Railroad,” which really does feel like it’s stopped in its tracks (#sorrynotsorry). We’ve touched upon it before, but it probably would’ve been better off being a weekly drop (or maybe two a week, although most of these episodes are over an hour) than a day-and-date one. It’s an extraordinary show, but totally not a show you’d binge, rather one you need to sit with to digest everything. Jenkins himself even tweeted a recommended viewing schedule with breaks. I don’t think it would’ve been a populist hit like “Mare” was, but it would’ve sustained a weekly conversation at least, whereas now it kinda feels like anyone who’s checking it out is searching for someone to talk about it with. That being said, all that matters is that voters watch it, so do you think voters are watching it despite the lack of buzz? I know you thought weeks (months? What is time?) ago that it could win series — are you still on that train (last one, promise)?

Christopher Rosen: I am, but the track to a nomination isn’t as straight as I initially expected. It seems clear conversation around “The Underground Railroad” has somewhat dissipated — likely because viewers either watched it all at once last month or were perhaps intimidated by the prospect of watching 10 hours of programming. But the show is a real triumph. Not to sound too snobby, but it’s definitely the closest approximation to a “film” that this category has to offer. Jenkins, working with so many of the crafts team that propelled “Moonlight” to Best Picture, has created not just what feels like a definitive portrait of slavery in America, but probably the most artistic and cinematic project released during the pandemic. “The Underground Railroad” is gorgeous, filled with the kind of images a filmmaker would be lucky to capture once in a career, let alone over the course of 10 hours. But! Jenkins’ work as an artist aside, I do wonder if Emmy voters will give it the consideration it deserves. Does watching “The Underground Railroad” at home, with the glare of overhead lights reflecting off the screen and someone’s leaf blower blasting just outside the window, take away from the experience? And in that regard, does something more poppy and relatively low-impact like “The Undoing,” with its saucy murder plot, prove more memorable as a result? If I had to make a pick for an upset nomination, that’s where I would go, but what about you?

joyceeng: For as cinematic as “The Underground Railroad” is, it is also perfectly suited for television because it is so episodic in its storytelling and structure (I am very much not here for the “This show is an X-hour movie” descriptors for any series). It’s different than “Small Axe” consisting of five different stories (speaking of trying to pass off TV as film). I think voters will check it out — there is prestige attached to it and pre-release hype — but I do wonder how many will complete it, how long it takes for them to complete it, and how many don’t return to it for whatever reason after taking a needed breather because, like you said, it’s not as easily addictive as something like “The Undoing.” However, “The Undoing,” I think, has been undone by “Mare” stealing all its “HBO murder mystery starring an Oscar- and Emmy-winning actress” thunder. “Small Axe” was in the top five until getting bumped out recently by “Mare,” but buzz on that is also low after having peaked in the winter, and it lost all its major BAFTA categories to “I May Destroy You,” including directing. I will stump for another HBO (Max) show by way of Britain, “It’s a Sin,” a superb, harrowing depiction of the HIV/AIDS crisis in the U.K. in the ’80s, but I feel like it might miss series the way Russell T Davies’ previous limited series, ironically starring Hugh Grant, “A Very English Scandal,” did despite nominations elsewhere. So I guess that’s a long-winded way of saying I might just stick with the current five. And in that case, is “The Queen’s Gambit” going to run away with it like everyone expects? I will point out that, unlike some other races, it is not unanimous among the pundits that Beth Harmon will call checkmate.

Christopher Rosen: We’ve kind of touched on this previously, but while I think there is a lot of recency bias potential in this race, voters will still put “The Queen’s Gambit” in… position to win. (Damn you for already stealing a checkmate pun!) The show was such a sensation that not even the surging “Mare,” or “I May Destroy You” or even Marvel can slow down its impending victory. I’ll let you have the last word, though: If it isn’t Beth and her rooks standing triumphant on Emmy night, what do you think pulls off the upset?

joyceeng: At this point, as voting starts, I would put my chips on “Mare.” It’s the only other show besides “The Queen’s Gambit” that, outside of being good and nailing the landing (sorry to “The Undoing’s” finale and “WandaVision” getting Marvelized at the end), struck a chord with the masses. Obviously we will regroup post-noms, but between “Mare’s” rise here and the developments in the actress race, we may have to take a road trip to Wawa before Sept. 19.