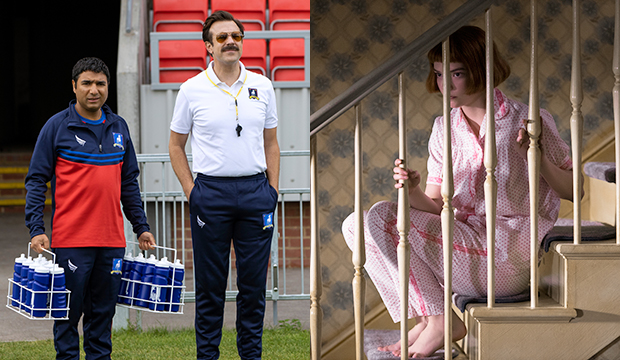 Welcome to Emmy Experts Typing, a weekly column in which Gold Derby editors and Experts Joyce Eng and Christopher Rosen discuss the Emmy race — via Slack, of course. This week, we take a gander at the writing and directing categories.

Christopher Rosen: Hello, Joyce! Emmy voting ended Monday and the Creative Arts Emmys ceremonies are just around the corner, so what better time than now to type about the brains behind this year’s biggest nominees: the writers and directors. Let’s start with the comedy side of things: We’ve both had “The Flight Attendant” winning in the directing category. It tracks: Susanna Fogel also won the Directors Guild Award for her work on the show and the Kaley Cuoco series is certainly flashier than the other nominees here. But I’m starting to wonder if that will actually matter. When faced with multiple options from the beloved “Ted Lasso,” a show that could not only win Best Comedy Series but multiple acting awards should things break right, will voters just check it off down the entire ballot? If that happens, I’d put “Biscuits,” directed by Zach Braff, as the winner — although my personal preference would be for “Make Rebecca Great Again,” arguably the best episode from all of Season 1. Meanwhile, on the writing front, I’ve long held firm that “Hacks” is the most “writerly” of the nominees — the show is literally about writing material — but the more I’ve thought it over, the more I think “Ted Lasso” is a winner for its pilot. People love “Ted Lasso” and the show’s entire arc and tone is established in that first episode! This feels like one of those categories we look back on in hindsight and wonder why we thought it would go any other way in the first place. What are you thinking at the moment? Is “Flight Attendant” about to hit some turbulence?

joyceeng: Oy. I feel terrible because I really do love “The Flight Attendant,” but I’m abandoning it left and right. First, it was Cuoco months ago and now I, like you, am thisclose to disembarking this “Flight” (sorry). As soon as “Ted Lasso” got three directing noms, I put “The Flight Attendant” in first. It has the flashiest direction, Fogel won DGA (where there was a double vote-split with two “Ted” eps and two “Curb Your Enthusiasm” eps), and directing is the most vote-split-y of all the branches. “The People v. O.J. Simpson: American Crime Story” and “Watchmen” could not survive three directing noms. But instead of “Ted,” I am probably going to board “Hacks” (OK, last one). Like “Ted,” it does not have the showiest direction, but it only has one nomination here (for its pilot), it over-performed with 15 nominations and is the presumed No. 2 in series. If “Ted” splits the vote, I think the beneficiary will be the show they liked second best, based on nom totals. I still have “Hacks” winning writing, so that means I’ll have “Hacks” taking writing and directing but “Ted” still claiming series. That sounds wild, but this is what happened to 2016 and 2017 comedy series champ “Veep” — it lost writing to “Master of None” both years and had three directing nominees both years as well, falling to “Transparent” in 2016 and “Atlanta” in 2017. It also lost directing in 2015 to “Transparent” (no vote-split that year) en route to winning series, and as I noted last week, in all three years, the directing award went to the show in second place for series in the odds. So… is “Ted Lasso” the next “Veep”?

Christopher Rosen: Here’s why I’d say no: those “Veep” splits between writing-directing and series happened when the show was well into its successful run and with newer, flashier options in those categories to lure away Emmy voters. “Ted Lasso” is fully formed: it’s still the new and flashy show for Emmy voters and accepted as extremely successful and acclaimed. Which is to say, it’s a bigger version of “Hacks.” The more we type, the more convinced I am in a “Ted” sweep here: series, writing, directing. Why not? It would honestly be weird if any other outcome emerged. But let’s put aside that drama for now and move onto Drama. Here again are categories where the series favorite — in this case “The Crown” — is expected to sweep. That’s what I have, with “The Crown” winning writing and directing. I honestly have a hard time thinking anything else is possible, but help me make the case for an upset.

joyceeng: Yeah, but which “Crown” episode in directing?! This is my dilemma with “Ted,” though I’m much closer to predicting “Ted” to win writing (albeit I prefer “Make Rebecca Great Again” of the two) than directing. “The Crown” can win directing despite two nominations, but I haven’t decided which one yet so I still have “The Mandalorian” as a placeholder. “Fairytale” is the favorite, understandably, and the safest choice, but I can see last year’s twist unfolding again and “War,” my writing pick, winning. “Succession” was expected to win for its finale, but it was the “boar on the floor” hour that was the last one, um, standing. What if we’re predicting the wrong episode of the series champ again? The directing branch has offered surprises here the last three years — “The Crown” and “Ozark” upset in 2018 and 2019. Ironically, “Succession” lost for its finale and won for its third episode, which would be the opposite for “The Crown” if “War” prevails. And while I currently have Mando, I think if it’s not “The Crown,” the dark horse is “The Handmaid’s Tale,” another former champ with a killer finale. But am I totally overthinking what will probably be a happy ending for “Fairytale”?

SEE Emmy Experts Typing: Will Michael K. Williams (or someone else) spoil ‘The Crown’s’ crowning moment?

Christopher Rosen: I like where your head is at: “The Handmaid’s Tale” does feel like the more likely alternate than “The Mandalorian” (I still think the wrong episode of “The Mandalorian” was even nominated). But who are we kidding? “Fairytale” is the episode of “The Crown” that stands out among the season: it’s the Charles and Diana hour and features two lead performances from actors most people think will win their respective categories. As such, it feels like an automatic choice. So, yes, this is me just going chalk. But before we go off into the night, give me your reason for picking “Mare of Easttown” in the directing category for limited series, a spot everyone — myself included –seems to have “The Queen’s Gambit” winning in a walk. Are we all being set up for a checkmate? (That’s a chess reference.)

joyceeng: Oh, thank God you explained because I really wasn’t sure if that was a pawn, er, pun. OK, so, yes, I said earlier this week I was considering moving to “Mare” for directing. I have not done it yet, but I probably will. I’m working backwards here, and since you have “The Queen’s Gambit” winning series, this switch wouldn’t make sense for you. But I have “Mare” taking the big one, and under the current system, limited series and directing have lined up every year except two: when aforementioned triple directing nominees “O.J.” and “Watchmen” lost to “The Night Manager” and “Unorthodox,” respectively. (Even if you go to the tape system, the last time directing didn’t go to the limited series or TV movie winner — you know, back when TV movies were a bigger deal than limited series — was 2007.) I know what you’re thinking: “’The Queen’s Gambit’ doesn’t have three nominations, Joyce! Can you not math?!” Jury’s still out. But it’s probably better to err on the side of those two categories matching than not, barring multiple noms, which, again, you’re already doing with a different show. So I guess I should now go dethrone the “Queen.”

PREDICTthe 2021 Emmy winners through Sept. 19
Emmy odds for Best Comedy Directing
The Flight Attendant is ahead