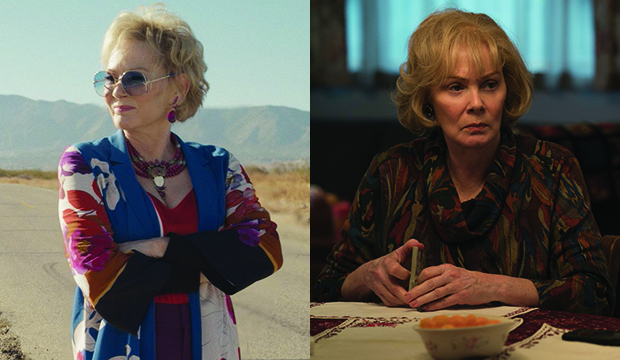 Will 2021 be the year of Jean Smart? The versatile stage and screen actress is one of a handful of actors who could potentially receive two nominations at this year’s Emmy Awards thanks to a starring role on HBO Max’s dark comedy “Hacks,” which premiered Thursday, and an excellent supporting turn opposite Kate Winslet on the HBO limited series “Mare of Easttown.”

Over the course of her career, Smart has been nominated for a total of nine Emmys, prevailing three times. She won back-to-back Best Comedy Guest Actress Emmys (2000-01) for her work on the long-running sitcom “Frasier” and a Best Comedy Supporting Actress award (2008) for her turn as Regina, the mother of Christina Applegate’s character, on the ABC comedy “Samantha Who?” But the two most recent times she was nominated — and was widely predicted to win both — she went home empty-handed.

In 2016, Smart was up for Best Limited/TV Movie Supporting Actress for her performance as Floyd Gerhardt, the powerful matriarch of a major crime syndicate, on FX’s anthology series “Fargo,” but she lost out to Regina King, who won her second consecutive Emmy for “American Crime.” Last year, Smart was nominated in the same category for her performance as Laurie Blake on HBO’s critically acclaimed and beloved limited series “Watchmen” (which also starred King, who won for her lead turn), but she lost to perennial Emmy favorite Uzo Aduba of FX on Hulu’s “Mrs. America.”

Double nominations and wins for Smart this year could potentially make up for those painful losses, and they would also be more than earned. On “Hacks,” which was created by Lucia Aniello, Paul W. Downs and Jen Statsky and has received rave reviews, Smart plays Deborah Vance, a comedy pioneer and legendary Las Vegas comic in need of new material who somewhat unwillingly becomes a mentor of sorts to a young and entitled comedy writer, Ava (Hannah Einbinder), whose missteps on the internet have essentially made her unemployable in Hollywood. Smart effortlessly dominates every scene she is in, delivering zingers in one scene before swiftly pivoting in the next to reveal the character’s hidden depths, all the while touching on the lengths Deborah has had to go to in order to be successful in an unforgiving and male-dominated industry.

With the strength of her killer performance and her own Emmy history to support her, Smart is currently sitting in fifth place in Gold Derby’s combined comedy actress odds despite the fact only two episodes of “Hacks” have dropped thus far. She trails Kaley Cuoco of “The Flight Attendant,” a fellow HBO Max star who has long been the frontrunner in the category after receiving (but not winning) her first Golden Globe and individual Screen Actors Guild Award nominations for the role, as well as Tracee Ellis Ross (“Black-ish”), Jane Levy (“Zoey’s Extraordinary Playlist”) and Allison Janney (“Mom”). It’s not too far-fetched to believe Smart will begin to rise in the odds once more people see “Hacks.”

On the similarly acclaimed limited series “Mare of Easttown,” Smart just as easily holds her own as the mother of Winslet’s titular character, a local hero and detective trying to solve the murder of a young teen while also attempting to keep her own life from falling apart. Smart admittedly doesn’t have a lot of screen time, but she certainly makes the most of what she is given. As a result, she is currently sitting in seventh place in the odds for limited supporting actress, trailing Kathryn Hahn (“WandaVision”), Marielle Heller (“The Queen’s Gambit”), Letitia Wright (“Small Axe”), Weruche Opia (“I May Destroy You”), Renee Elise Goldsberry (“Hamilton”) and Teyonah Parris (“WandaVision”).

Smart has enjoyed a career renaissance over the last decade or so — she was also a series regular on the FX comic book series “Legion” for two seasons — and while we could argue she should have won at least one of the limited supporting actress Emmys she was nominated for over the last five years, she’s got two very strong performances this year. Although the limited series field is crowded, Smart has a really good chance of triumphing in comedy, which is fairly open since most of last year’s nominees are now ineligible. We won’t go as far as to say that she’s due for another Emmy necessarily, but now that she’s not being heavily predicted to win, perhaps she can pull off her own surprise come-from-behind victory. Crazier things have definitely happened.