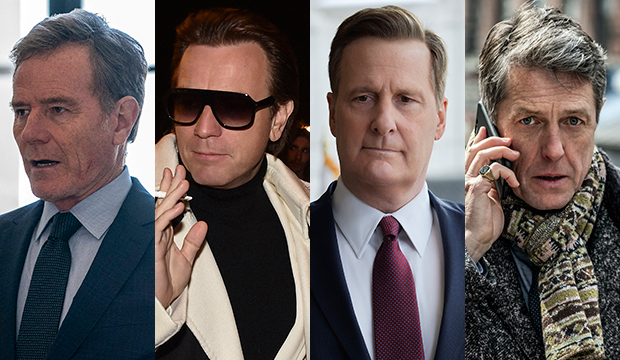 The Best TV Movie/Limited Series Actor Emmy race is one of the few this year that truly feels up in the air, which is good news for a handful of contenders who are looking to avenge recent losses in the category. The top seven in our odds are Ethan Hawke (“The Good Lord Bird”), Hugh Grant (“The Undoing”), Paul Bettany (“WandaVision”), Lin-Manuel Miranda (“Hamilton”), Jeff Daniels (“The Comey Rule”), Ewan McGregor (“Halston”) and Bryan Cranston (“Your Honor”) — four of whom took an L here in successive years.

Cranston was the first, losing in 2016 for the film adaptation of the play “All the Way,” for which he won a Tony, to Courtney B. Vance (“The People v. O.J. Simpson: American Crime Story”). In 2017, McGregor, competing with a dual performance in the third season of “Fargo,” fell to Riz Ahmed (“The Night Of”). The “American Crime Story” franchise scored another victory in 2018 when Darren Criss (“The Assassination of Gianni Versace”) won over Daniels’ performance in “The Looming Tower.” Don’t feel too bad for him — he won in supporting instead for “Godless.” And in 2019, Grant earned his first career nomination for “A Very English Scandal” but lost to “When They See Us” star Jharrel Jerome, who became the category’s second youngest champ at 21.

None of their losses were surprising as all those years had clear frontrunners. The same cannot really be said this year. While Hawke is out front with 7/2 odds, he’s far from feeling like a lock the way, say, Jason Sudeikis (“Ted Lasso”) does. Part of that is because “The Good Lord Bird,” which Hawke co-created, produced and co-wrote, as a whole under-performed in the winter. Hawke also lost the Golden Globe and Screen Actors Guild Award to reigning Emmy champ Mark Ruffalo (“I Know This Much Is True”). He wasn’t even nominated at Critics Choice, which went to John Boyega (“Small Axe”), who is competing in supporting at the Emmys.

Meanwhile, Bettany, like Hawke, is seeking his first career bid for a high-concept show by Marvel, which is a question mark at the Emmys but could easily have a major breakthrough like “The Mandalorian” did last year, and Miranda, a four-time nominee and one-time champ, is contending for a performance that lost to that of his co-star (Leslie Odom Jr. is in eighth place) at the Tonys. Plus, it’s unclear if voters will have any hesitation about voting for performances in a filmed version of a stage musical.

That’s not to say that any of the aforementioned quartet are much stronger, but more that they’re all kinda the same. A six-time Emmy champ, Cranston won the SAG Award for “All the Way,” but he’s only snagged a Globe nom for “Your Honor” thus far. Ditto for Daniels for “Comey.” Like his run for “A Very English Scandal,” Grant has been nominated everywhere for “The Undoing” but he hasn’t yet been to the virtual podium. And with HBO’s other murder mystery, “Mare of Easttown,” a huge hit, “The Undoing” sort of feels like an afterthought. McGregor is the only spring contender of this foursome, as “Halston” premiered last month, but buzz has been low for the show overall. However, don’t underestimate a splashy but mixed-reviewed Ryan Murphy project at the Emmys — “Hollywood” earned four acting nominations last year, including in lead actor for Jeremy Pope.

Basically, anyone can make this lineup and anyone can win, so there is a chance for these four recent losers.