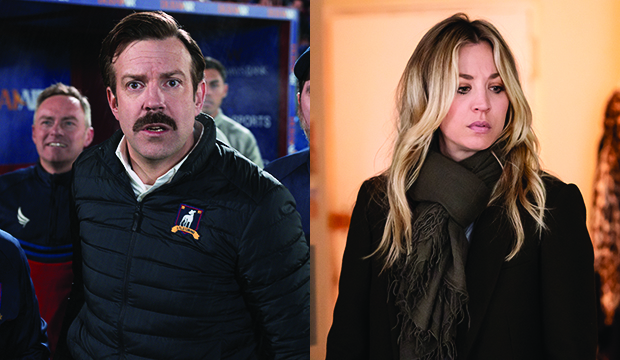 For the last six years, Best Comedy Series and Best Comedy Actress have gone hand in hand, but that probably won’t happen this year. “Ted Lasso” is the heavy favorite to take the top comedy prize and the Apple TV+ series does not have a lead actress in contention.

Though some might argue comedy supporting actress favorite Hannah Waddingham, “Ted Lasso’s” de facto female lead, could make a play in lead, especially with so many shows delayed by COVID-19, she’s sticking with the placement that has already nabbed her a Critics Choice Award. Kaley Cuoco tops the Best Comedy Actress odds, but “The Flight Attendant” is in second in the series race. There’s also Jean Smart, who’s quickly rising in the actress odds — she now has more Experts backing her than Cuoco does and is in third — however “Hacks” is in sixth place in series. If either of these ladies prevail, their respective HBO Max series will need some major momentum and/or an over-performance in nominations to put up a fight against the breakout hit that is “Ted Lasso” and to continue these twin wins.

The streak started in 2015 when “Veep” took home Best Comedy Series for the first time after five straight victories by “Modern Family” while Julia Louis-Dreyfus picked up her fourth straight Best Comedy Actress trophy for the HBO satire. Before that, there were only two other instances this century of comedy series and actress lining up: “Friends” and Jennifer Aniston in 2002, and “30 Rock” and Tina Fey in 2008.

“Veep” and JLD won again in 2016 and 2017 but skipped the 2018 season due to the star’s breast cancer battle. That allowed Amazon’s “The Marvelous Mrs. Maisel” and Rachel Brosnahan to clean up for the first season. “Maisel” and “Veep,” in its seventh and final season, were in the running in 2019, but “Fleabag” and Phoebe Waller-Bridge struck gold. And who could forget last year when “Schitt’s Creek” swept all seven comedy categories at the main ceremony, including actress for Catherine O’Hara, for its final season?

With “Schitt’s Creek” done, we are guaranteed new winners in all of the comedy categories. But while the series/actress pattern is on the verge of ending, “Schitt’s Creek’s” dominance last year could’ve also been the start of a new trend. Best Comedy Series and Best Comedy Actor matched up last year, obviously, with Eugene Levy winning the latter, and that looks likely to happen again this year. “Ted Lasso” co-creator and star Jason Sudeikis is more of a lock in actor than the show is in series after he swept the winter awards, beating Levy at every stop. “Ted Lasso” was bested by “Schitt’s Creek” for series wins (and the ensemble Screen Actors Guild Award) everywhere except the Critics Choice Awards, so it probably would’ve won those if it were not for the little Pop TV show that could.