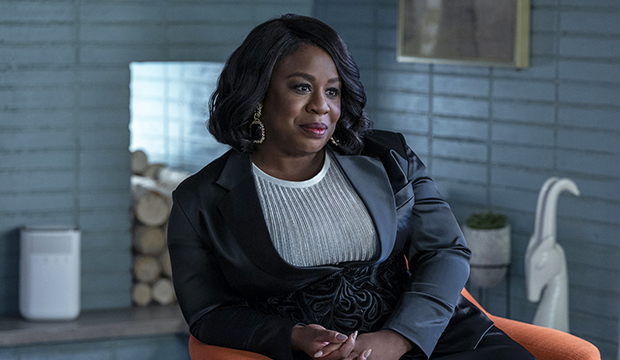 Uzo Aduba has already won three Primetime Emmys in three different genres, which is an incredible feat and a fun piece of trivia to tuck in your back pocket for when she inevitably ends up being an answer on “Jeopardy!” But now the former “Orange Is the New Black” star is poised to potentially pick up a fourth Emmy in a fourth category at this year’s ceremony.

Aduba stars in the upcoming revival of HBO’s acclaimed drama “In Treatment” as the therapist at the center of the show. She is currently sitting in fifth place in Gold Derby’s combined odds for Best Drama Actress even though the show has not yet premiered (it debuts May 23 on HBO and HBO Max). As it stands now, she’s trailing recent Golden Globe and Critics Choice winner Emma Corrin (“The Crown”), three-time Emmy nominee Olivia Colman (“The Crown”), former Emmy winner Elisabeth Moss (“The Handmaid’s Tale”) and Jurnee Smollett (“Lovecraft Country”).

It will be interesting to see how Aduba’s odds might change once “In Treatment” debuts given her impressive history at the Emmys. She’s won three times out of four nominations, which speaks to both her talent and her ability to connect with voters. So knowing that Emmy voters love her and that they don’t seem to be as keen on “The Crown” as everyone else — only Claire Foy and John Lithgow have ever won for their performances on the royal drama — Aduba likely has a decent shot at potentially triumphing again and taking home another Emmy in a fourth category.

Should she win, it would make for quite the interesting Emmy display. Aduba previously won both Best Comedy Guest Actress (2014) and Best Drama Supporting Actress (2015) for her performance as Suzanne “Crazy Eyes” Warren in the Netflix series “Orange Is the New Black” after the show switched from comedy to drama following a 2015 rule that declared half-hour shows to be comedies and hour-long shows to be dramas. With her two wins for the role she became only the second person in history to win Emmys in both comedy and drama for playing the same character. Ed Asner was first when he portrayed Lou Grant in both “The Mary Tyler Moore Show” and its spin-off “Lou Grant.”

And if things work out with “In Treatment,” Aduba could check off two of the three actress categories in drama. Someone book her a guest spot on a drama STAT.