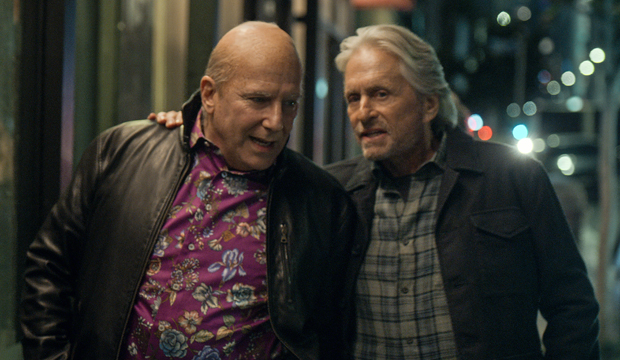 When current Emmy nominee Paul Reiser first appeared on Netflix’s “The Kominsky Method” in its second season, he looked nearly unrecognizable. Introduced as a boyfriend for Mindy Kominsky (Sarah Baker), Reiser’s character Martin strikes Sandy (Michael Douglas) as a strange mate for Mindy, who’s decades his junior. But beyond their age difference and underneath Reiser’s bald cap and aging hipster ponytail are hidden reserves of the same lovable imperfections that made Emmy voters fall in love with his performance on “Mad About You,” which earned him 10 nominations as actor and executive producer.

Reiser delivered one of the best onscreen performances of his career in the second season of “Kominsky” in the episode “Chapter 14: A Secret Leaks, a Teacher Speaks,” when Sandy asks Martin to introduce himself to his acting class from the stage. After a perfunctory few sentences about his former career as a high school teacher, Martin digs deeper to talk about his recent heart attack and his newfound tendency of “wondering what the hell I did with my life.” It’s a self-deprecating and moving monologue performed delicately and achingly by Reiser that highlights the nuances that he brings to what could have been a one-note character.

For this year’s contest, Reiser submitted a much more comedic installment, “Chapter 18: You only give me your funny paper.” The whole half-hour revolves around a big secret that Sandy forces Mindy to keep from Martin: Norman (Alan Arkin) left Mindy a $10 million inheritance, but he worried that Martin is “not a keeper.” This set-up makes viewers question all of Martin’s behavior, from his childlike enthusiasm about scratch-off lotto tickets to his unhealthy eating habits, and Reiser plays his scenes with a delicious enthusiasm and naiveté. Reiser also shares an awkward but honest scene opposite Douglas in which Martin asks if something is going on with Mindy because their dynamic seems out of whack.

The episode highlight – and indeed one of the season’s highlights – pairs Reiser with Oscar nominee Kathleen Turner, who plays Mindy’s mother Roz. Martin shows Roz how he attempts to bridge his and Mindy’s generational divide by hilariously rapping the lyrics to Megan Thee Stallion’s “Intro– Make it Hot.” Complete with hand gestures and momentary lapses in memory, Reiser’s rendition leaves Turner’s Roz speechless and cackling, just as he does viewers.

SEE ‘The Kominsky Method’: Finally an Emmy win for Paul Reiser after all those ‘Mad About You’ losses?

In the contest for Best Comedy Supporting Actor, Reiser currently ranks sixth in our current combined odds. He trails Kenan Thompson (“Saturday Night Live”), Brett Goldstein (“Ted Lasso), Bowen Yang (“Saturday Night Live”), Brendan Hunt (“Ted Lasso”) and Nick Mohammed (“Ted Lasso), and maintains a narrow lead over Jeremy Swift (“Ted Lasso”) and Carl Clemons-Hopkins (“Hacks”). The list of nominees hides in plain sight a huge advantage for Reiser that could lead him to a surprise victory: six of his seven competitors all have internal competition from their costars, and with so many “Ted Lasso” and two strong “SNL” actors vying for their fans’ support, Reiser could prevail by a razor-thin margin of “Kominsky” lovers.

While vote-splitting didn’t benefit “The Kominsky Method” guest star Morgan Freeman, who lost Comedy Guest Actor this past weekend to Dave Chappelle (“SNL”), this is the most popular season of “The Kominsky Method” with the Emmys. Its swan song earned six nominations, doubling what it earned for each of its two earlier outings. Voters may not want the series to end empty-handed, and with Jason Sudeikis (“Ted Lasso”) all but certain to win over Michael Douglas, Reiser looks like the series’ best shot at taking home an Emmy. He’s certainly overdue, too, as his first nomination dates back nearly three decades and he has still not yet won.