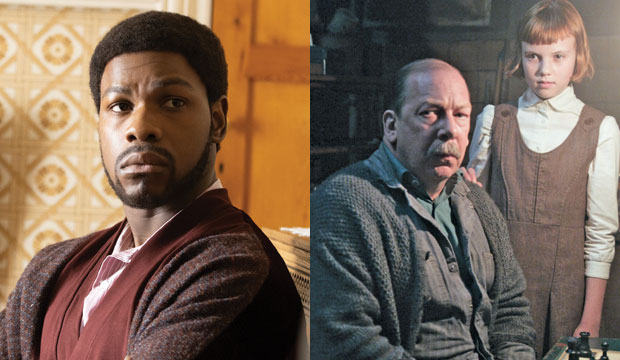 John Boyega had a strong winter and spring awards season for his performance in the “Red, White and Blue” episode of Steve McQueen‘s anthology series “Small Axe,” winning at both the Golden Globe and Critics Choice Awards. Will his momentum continue at the Emmys? He’s the front-runner to win Best Movie/Limited Supporting Actor, but a few of our Experts think he’ll be upset by veteran character actor Bill Camp (“The Queen’s Gambit”).

Boyega has gone back and forth this awards season, winning the Golden Globe as a supporting actor but then Critics Choice as a lead (he also picked up a BAFTA nom as a lead). He’s entered as a supporting actor at the Emmys because while he’s the front-and-center protagonist of his episode about a Black cop trying to reform a racist police force, he doesn’t appear in any of the other four episodes of “Small Axe,” which all tell different stories. It could be an advantage to be a leading man in a supporting category, though since his episode is only 80 minutes long, it probably evens out with many actors in this category who appear across a half dozen or more installments.

SEEBill Camp (‘The Queen’s Gambit’): If he was a chess piece, Mr. Shaibel ‘would be a knight’ [EXCLUSIVE VIDEO INTERVIEW]

Nevertheless, Boyega is predicted to win by 20 of the Expert journalists we’ve surveyed, far more than any other contender. However, the last four Experts who have chimed in as of this writing think there will be an upset from Bill Camp (“The Queen’s Gambit”). He has limited screen time as Mr. Shaibel, the custodian who teaches Beth Harmon (Anya Taylor-Joy) how to play chess at her orphanage, but his impact is felt throughout the series, and he’s so ubiquitous in film and television that he may very well have worked with most of the television academy at this point in his career; in just the last three years his credits have included “Wildlife,” “The Looming Tower,” “Vice,” “Joker,” “The Outsider,” and “News of the World.”

Goodness knows Camp is loved by his peers, earning an Emmy nomination for his supporting role in the limited series “The Night Of” in 2017 and picking up a SAG Award nomination earlier this year for his performance in “Queen’s Gambit.” That SAG bid is especially noteworthy because there are only five nomination slots there in a category that combines lead and supporting actors, which means he had to beat out numerous lead actors to get in there — including Boyega, who wasn’t nominated by SAG. Does that indicate greater industry support for Camp that could signal an Emmy win, or will Boyega maintain his advantage all the way through Emmy night?