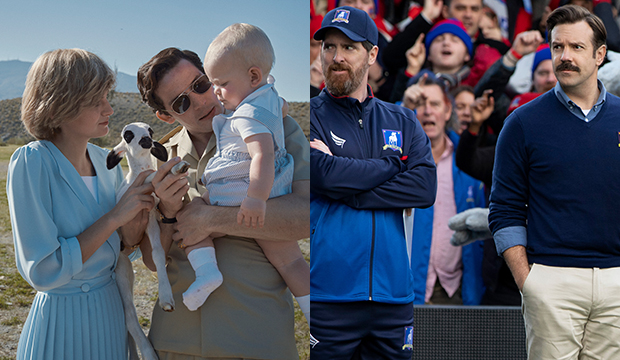 “The Crown” and “Ted Lasso” will be by far the biggest winners at the Primetime Emmys this Sunday, September 19, when they’re presented at a ceremony on CBS hosted by Cedric the Entertainer. That’s according to the combined predictions of thousands of Gold Derby users. Scroll down for those complete forecasts in all 27 categories listed by program. And make or update your own predictions here before this weekend’s show for a chance to win our contest.

“The Crown” is favored to win Best Drama Series for the first time after four seasons on Netflix. It would also be the first win in that category for the pioneering streaming service. But that’s not all. We’re also betting on it to win acting prizes for leads Emma Corrin and Josh O’Connor, plus supporting actress Gillian Anderson, a writing victory for the season finale episode “War” and a directing prize for “Fairytale.” Combined with the four awards the show won at last weekend’s Creative Arts Awards, that would bring the show to 10 total victories for the year. That would make it one of the most awarded dramas of all time in a single year, behind “Game of Thrones,” which won 12 times at three different ceremonies.

“Ted Lasso” is the front-runner for Best Comedy Series and has been for most of the year, even before the nominations were announced. It picked up 20 bids, more than any first-year series in history. Of those it’s also tipped to win acting honors for Jason Sudeikis, Brett Goldstein, and Hannah Waddingham, plus a writing award for the pilot episode and the directing prize for Zach Braff‘s “Biscuits.” Added to the show’s three Creative Arts victories, that would bring its total to nine wins, tying the record set by “Schitt’s Creek,” which won nine times last year, the most for a comedy in a single year.

See who else is favored to win on Sunday night below. Do you agree with these predictions? Who might we be underestimating? Join the discussion on this and more with your fellow TV fans here in our forums.

SEEWhen are the Emmys? Everything to know about the 2021 Primetime Emmy Awards

“I MAY DESTROY YOU”
Best Movie/Limited Writing

Update: A previous version of this article indicated that “Ted Lasso” was predicted to win five awards, but since publication the odds changed so that the series was favored to win six.