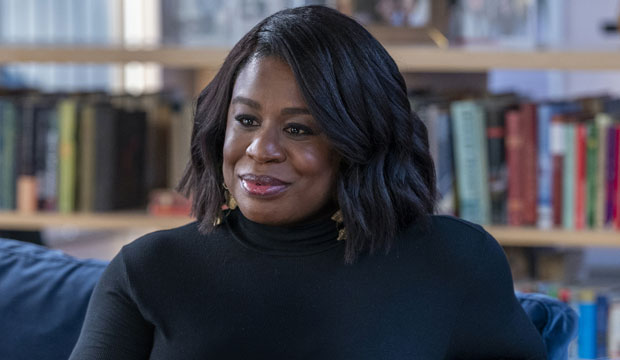 When HBO announced a fourth season of its Emmy-winning series “In Treatment” more than 10 years after the third season wrapped, star Uzo Aduba had Gabriel Byrne’s Emmy-nominated shoes to fill. It came as no surprise that Aduba dazzled as the show’s new lead, as her therapist character Brooke aided and occasionally sparred with patients played by Emmy nominee Anthony Ramos (“Hamilton”), former nominee John Benjamin Hickey (“The Big C”) and standout Quintessa Swindell. The best moments of the entire season, though, feature Brooke grappling with her own challenges, including the death of her father, her alcoholism, and her long-festering regrets about her son, who she was forced to give up for adoption.

All of these issues take center stage in Aduba’s tour-de-force Emmy episode submission, “Brooke – Week 5.” Waiting on a last-minute visit from Byrne’s Paul – though unseen, this new season repeatedly references Paul as Brooke’s mentor – Brooke delves deep into her mind to explore her anxiety at this pivotal moment in her personal life. Shot as a conventional episode of “In Treatment,” Aduba plays Brooke as both patient and therapist simultaneously in a marvel of a performance that makes viewers see these different facets of the same character as distinct individuals.

As therapist-Brooke, Aduba gets to be more introspective and emotionally vulnerable than she had previously been with her other patients. This character serves as a brilliant scene partner for patient-Brooke, which is where Aduba truly shines. When Brooke opens up about her mother for the very first time on the series, Aduba processes so many different emotions, from love to deep grief and anguish, as she painfully admits that she felt she was “too much” for her mother, who herself was an alcoholic and died young. Aduba’s honesty and intensity is palpable through the screen, and when Brooke tells herself that she is “pure gold,” viewers no doubt agree and rejoice that Brooke gives herself the recognition she deserves.

Aduba currently ranks fifth in the Drama Actress category in our current combined odds, behind Emma Corrin (“The Crown”), Mj Rodriguez (“Pose”), Elisabeth Moss (“The Handmaid’s Tale”) and Olivia Colman (“The Crown”), with Jurnee Smollett (“Lovecraft Country”) rounding out the nominees. Though trailing, Aduba’s popularity with the acting branch shouldn’t be underestimated. Just last year, she pulled off a surprise victory in Limited Supporting Actress for “Mrs. America” despite competing against two of her costars and frontrunner Jean Smart for “Watchmen.” Aduba previously won twice for “Orange Is the New Black,” earning trophies for the same character in both comedy and drama categories.

Aduba’s nomination for “In Treatment” may also be an instance where an Emmy episode submission has real impact. For voters who might not have seen the series before the nominations, Aduba’s submission may be their first introduction to her performance, and it is truly a memorable one. Not only does the episode work well as a standalone installment, but if voters had already seen and therefore did not revisit her fellow nominees’ submissions, then Aduba’s unforgettable work might have been top of mind when they cast their ballots.