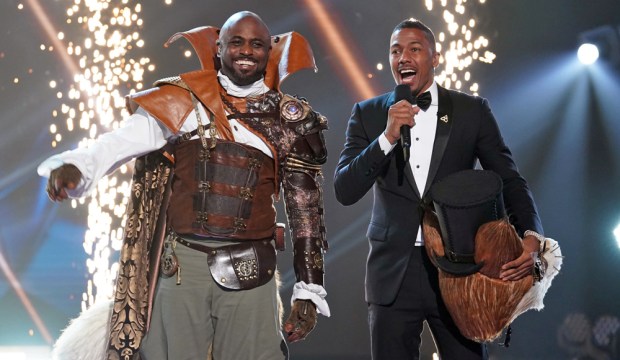 On December 15, singer-songwriter Jewel became the sixth recipient of “The Masked Singer’s” coveted Golden Mask trophy. The artist formerly known as the Queen of Hearts joined the esteemed list that includes former winners T-Pain (Monster), Wayne Brady (Fox), Kandi Burruss (Night Angel), LeAnn Rimes (Sun) and Nick Lachey (Piglet). But which one of these champions is the fans’ all-time favorite?

Brady tops Gold Derby’s recent poll with a leading 54% of the vote, far ahead of the second-place contender, Rimes, at 19%. Jewel is next in line with 14% support, while the others all finished below the 10% mark. Here are the complete poll results:

Brady is a five-time Emmy winner who developed a plan in Season 2 to confuse the panelists and lead them to believe he was Jamie Foxx. As the weeks passed by, Brady wowed viewers with his voice, dance moves and charisma inside the dapper Fox costume. Following his final performance of “Try a Little Tenderness,” Brady won the Golden Mask over runner-up Chris Daughtry (Rottweiler). Both Robin Thicke and Nicole Scherzinger got credit by correctly naming Brady.

In Season 4, the Sun was the first contestant to perform and set the bar extremely high with her “Cuz I Love You” cover. Throughout the competition the sleuths threw out all kinds of guesses, but in the end both Jenny McCarthy and Nicole pegged Sun as the former child singer. As the shining star, Rimes also took on such iconic tunes as “Praying,” “Piece of My Heart,” “When the Party’s Over” and “The Story.”

None of the panelists correctly guessed Jewel was the Queen of Hearts as their first impressions, however all but Ken Jeong eventually switched to her for their final picks. “It really is an honor to be in the hall of costumes and with the other amazing winners,” Jewel noted. The runner-up in Season 6 was Todrick Hall as the Bull.

SEETodrick Hall (‘The Masked Singer’ Bull) unmasked interview: ‘Being inside this costume gave me courage’

T-Pain, a popular rapper and hit-making producer, made history as the first winner of “The Masked Singer” on February 27, 2019. All four judges were stumped on guessing the Monster’s true identity, making it one of the most shocking reveals of all time. The runner-up that season was Donny Osmond as the Peacock.

Nick Lachey became the fifth champion in Season 5, with Jenny being savvy enough to name the boy band singer as her first impression. “This experience has [reminded] me how much I love singing, how much I love music,” the unmasked Piglet said as the final credits rolled. The runner-up that season was JoJo as the Black Swan.

Business mogul and Grammy-winning songwriter/realty TV star Kandi Burruss became the first woman to claim victory in Season 3. Both Robin and Jenny name-dropped Burruss in the finale. This winged purple vixen wowed with her last performance of “River Deep, Mountain High.” The runner-up that season was Jesse McCartney as the Turtle.