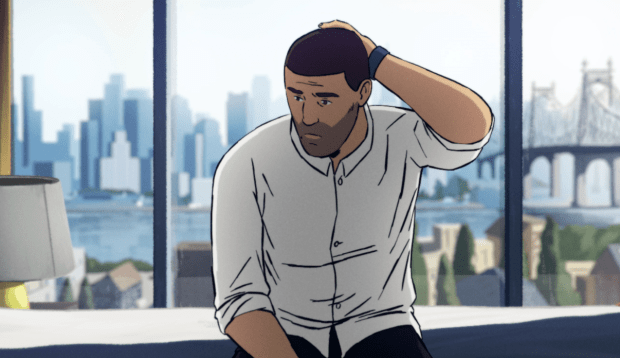 When the academy announced qualifiers for the Documentary, Animated and International features awards, one title made all three lists: the haunting hybrid Danish documentary “Flee.” The animated/live action documentary examines displacement and self-discovery through the eyes of Amin Nawabi (a pseudonym for the subject who co-wrote the film, a gay, Muslim Afghani refugee who was a teenager when he came to live in Denmark).

Though he’s now an academic living in Copenhagen with his boyfriend, Nawabi had a harrowing, grueling childhood, and adolescence. His father was taken away by the Communist government and never seen again. They escaped the worn-torn country in 1989 and ended up isolated and illegal in post-Communist Russia with outdated immigration papers before enduring even more dangerous journeys to find a home in Denmark with a foster family

Directed and co-written by Nawabi’s longtime friend, Jonas Poher Rasmussen, “Flee” is one of the top contenders for Oscar nominations in all three categories. It won the Sundance Grand Jury Prize this past January and has received numerous critics’ honors including the Gotham Award for best documentary, the New York Film Critics Circle award for best-non-fiction award and the National Board of Review’s Freedom of Expression prize. “Flee” also won European Animated feature at the European Film Awards and has been nominated for an Independent Spirit Award for documentary.

Rasmussen recently talked about “Flee” for Film Independent. He never had the intention of doing a refugee story, an Afghani story. “It was always a story about my friend and our friendship. That was kind of what started the whole thing-this thing about having a close friend, where he has a secret, something he doesn’t talk about and how that affects our friendship.”

The project changed in 2015 with the European refugee crisis. Rasmussen realized “Flee” could be a way to give the refugee plight a human face. “A lot of the time, refugees are described by what they need. They need something. But here, because it’s told from within a friendship, I could give a lot more nuance to the refugee story. “Being a refugee, the filmmaker noted, is not an identity. “It’s a circumstance. It’s a situation you live through. So really to be able to give a human face to a refugee story and kind of represent refugees in a way where you feel, ‘Okay, they’re complex individuals like everyone else.’’

Rasmussen and Nawabi met each other at school in Denmark in the 1990s. “Making of the film came quite late,” he explained. “He arrived to my little Danish village when I was 15- years- old. He came by himself and lived in foster care with a family just around the block from where I lived. I, of course, was curious already back then about why and how he had come there.” But Nawabi wouldn’t talk about it. “Then from there, our friendship grew, and it just wasn’t part of our conversation,” he said. “But the curiosity was there.

Fifteen years ago, Rasmussen, who has a background in radio, asked if he could do a radio documentary about his story. Nawabi refused. “He said he didn’t feel ready. But he also said he knew that he would have to share the story at some point. And when he felt better, he would like to chat with me. So, I kind of had it in the back of my head that this was something that we could do at some point. But just trying to figure out what’s the form to tell the story in.”

The answer came eight years ago when he was invited to a workshop in Denmark that would combine animators and documentary filmmakers to develop ideas for animated documentaries. Rasmussen thought this might be the way to tell his friend’s story. And this time, Nawabi agreed. “The fact that he would be anonymous behind the animation would help him because what you see in the film, what you hear in the film, is the very first time he talks and it’s not easy for him to talk. So the fact that he could be anonymous and still have controland when he’s able to share was really what enabled him to kind of set him free.”

Rasmussen noted making documentaries is always a balancing ac: you need to take care of your subject but still get the story told. So, in the beginning creating a safe space for Nawabi was paramount. “In the first year and half, the agreement was that we were just trying it out The agreement was that if he felt like this isn’t working, he could always walk out and I wouldn’t make the film.” Not only did he record their conversations, Rasmussen shot everything on video. “My animation director and editor had access to all the video materials, so the animators would pick details from his expressions, from whatever happened in the video and put into the animation.”

He also had Nawabi lie down, close his eyes and speak in the present tense to be interviewed  “We have a tradition for doing radio documentaries in Denmark and it was one of the first things I learned. When you do radio, you don’t have an image, so you really need the subject to be very descriptive and paint a picture for you.” The technique, he said, brings a subject back to certain memories such as in the beginning of the film “at his childhood home, in the garden with his siblings.  I would ask him about the location. What does the garden look like? What do you see outside the walls? All of this would give the animators a lot of material that they kind of worked from.  It also brought him back to the specific situation and made him kind of relive it and generate new memories. All of a sudden, he would remember details. It feels very present.”