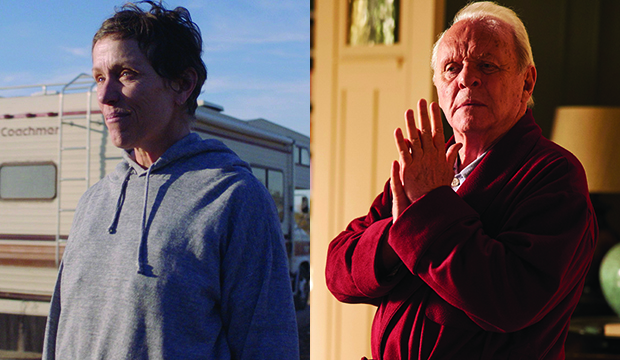 BAFTA went its own way with its lead acting categories this year, handing wins to Frances McDormand (“Nomadland”) and Anthony Hopkins (“The Father”). Well, it had to in Best Actress with three of the Oscar nominees who also won the first three precursors BAFTA-snubbed, but Hopkins upset Best Actor frontrunner Chadwick Boseman (“Ma Rainey’s Black Bottom”), who had been sweeping. Now that they each have only a BAFTA on the ledger, can they translate it into Oscar gold? Or will they prove to just be a BAFTA thing?

Since the BAFTAs became an Oscar precursor 20 years ago, a handful of actors have taken home the Oscar with just a BAFTA under their belts. There are two special cases we should asterisk: Kate Winslet won the Best Actress Oscar for “The Reader” (2008) with only a BAFTA victory in that corresponding category. But, as we all know, she had campaigned and won the Golden Globe, Critics Choice Award and Screen Actors Guild Award for “The Reader” in supporting. Because of her supporting campaign, Penelope Cruz (“Vicky Cristina Barcelona”) lost all those awards, but she won the Best Supporting Actress BAFTA and Oscar in Winslet’s absence.

Excluding those, three people have won the Oscar with only the BAFTA — and all in supporting: Alan Arkin for “Little Miss Sunshine” (2006), Tilda Swinton for “Michael Clayton” (2007) and Mark Rylance for “Bridge of Spies” (2015). Hopkins’ potential path mirrors that of Arkin. Like Boseman, Eddie Murphy (“Dreamgirls”) had won all the other precursors, but the big difference is that Murphy wasn’t even nominated at BAFTA, which, lest we forget, once handed out one of the most inspired nominations ever to the comedian for voicing Donkey in “Shrek” (2001). Arkin grabbed BAFTA and then Oscar against Murphy.

That’s not the only thing they have in common. Though it had fewer Oscar nominations than “Dreamgirls” did (four to eight), “Little Miss Sunshine” was the stronger contender with a Best Picture bid and wins at the Producers Guild of America Awards and the Screen Actors Guild Awards for ensemble. It won two BAFTAs, Best Original Screenplay being the other, and repeated those wins at the Oscars — something “The Father,” which snagged the Best Adapted Screenplay BAFTA and is also a Best Picture Oscar nominee, could do as well. “Dreamgirls,” on the other hand, was surprisingly snubbed in Best Picture, just like “Ma Rainey” was, and has the dubious distinction of being the first film to earn the most Oscar nominations in a year without a Best Picture bid. “Ma Rainey,” meanwhile, could win the most Oscars in a year without a Best Picture nomination (four) since “The Matrix” (1999).

Swinton and Rylance won their BAFTAs and Oscars in split years, which is what McDormand is trying to pull off. Thus far, the chaotic Best Actress race has shaken out exactly like Swinton’s year, with four different people taking a precursor. Back then, Cate Blanchett (“I’m Not There”) had the Globe, Amy Ryan (“Gone Baby Gone”) collected Critics Choice, and Ruby Dee (“American Gangster”) bagged SAG; only 13-year-old Saoirse Ronan (“Atonement”) hadn’t won anything (the Vanessa Kirby of the year as it were). Similar to McDormand — who only faced “Pieces of a Woman’s” Kirby at BAFTA since Globe champ Andra Day (“The United States vs. Billie Holiday”), Critics Choice winner Carey Mulligan (“Promising Young Woman”) and SAG queen Viola Davis (“Ma Rainey’s Black Bottom”) were AWOL — Swinton defeated just two of her Oscar rivals at BAFTA, Blanchett and Ronan.

Swinton went on to win the Oscar, perhaps helped by the fact that she was in the strongest film. Only Swinton and Ronan were in Best Picture nominees, both of which had seven bids, but “Michael Clayton” had a Best Director nomination, which “Atonement” lacked. As if you needed a reminder, but McDormand fronts the probable Best Picture winner and faces only one other person from a Best Picture nominee, Mulligan. And because the parallels just won’t end, both races also featured two nominees as the sole mentions for their respective films: Blanchett and Ryan then, and Day and Kirby now. Of course, the biggest disparity is that Swinton was competing for her first Oscar and McDormand is seeking her third in lead with her second one being very recent compared to Hopkins, whose only previous win was 29 years ago.

Meanwhile, Rylance triumphed in a year that was dominated by a comeback and nostalgia narrative for “Creed” star Sylvester Stallone, who knocked out the competition at the Globes and Critics Choice but was snubbed at SAG and BAFTA. Idris Elba (“Beasts of No Nation”) scored SAG, but he was Oscar-snubbed. Rylance won the BAFTA, which many brushed off as a default win (a la McDormand) and/or the Brits jonesing for revered homegrown talent (a la Hopkins), but the underdog pulled off the upset in the end. Or was it even one? After all, Rylance was the only consistent nominee in that category at every awards show that year and he was in a Best Picture nominee, unlike Stallone, who was “Creed’s” only nomination.

SEE Could BAFTA win for Anthony Hopkins foretell Oscars surprise like it did for Olivia Colman?

Now, it’s only fair to also consider the flip side of sole BAFTA winners who lost the Oscar, of which there are, unsurprisingly, more instances for various reasons (eligibility issues, category placement weirdness, etc). If McDormand were to lose the Oscar, she’d most resemble Judi Dench, who won the Best Actress BAFTA for “Iris” (2001) in another unsettled year. Sissy Spacek (“In the Bedroom”) had earned the drama Globe and Critics Choice, Nicole Kidman (“Moulin Rouge!”) had the comedy/musical Globe, and Halle Berry (“Monster’s Ball”) prevailed at SAG. Berry wasn’t eligible at BAFTA and we all know what happened at the Oscars. In another coinky-dink, if Davis were to win, she, like Berry, would do so with only the SAG and would, of course, be the second Black Best Actress winner after her.

As for Hopkins, an Oscar loss would make him the Colin Firth of the year. The Brit won the Best Actor BAFTA for “A Single Man” (2009), preventing eventual Oscar champ Jeff Bridges (“Crazy Heart”) from a full sweep in what did turn out very much to be a BAFTA thing. But “The Father” is stronger than both of those films combined. “A Single Man” and “Crazy Heart” had two BAFTA bids each. At the Oscars, Firth was his film’s only nomination, and while “Crazy Heart” was able to get a supporting actress coattail bid for Maggie Gyllenhaal to bump its nomination count to three, Bridges is the last Best Actor winner who did not come from a Best Picture nominee — something Boseman is trying to accomplish. Of note, that year was also the last time neither of BAFTA’s lead winners claimed the Oscar; BAFTA gave Best Actress to… Mulligan for “An Education” as eventual Oscar champ Sandra Bullock (“The Blind Side”) was ineligible.

So what does this mean for McDormand and Hopkins? Well, McDormand probably has the better chance of winning just because of the sheer wackiness of her race in which votes could be so fractured that it wouldn’t take a lot to win. But there is precedence for both to triumph — just not in lead at the moment — in eerily similar situations.