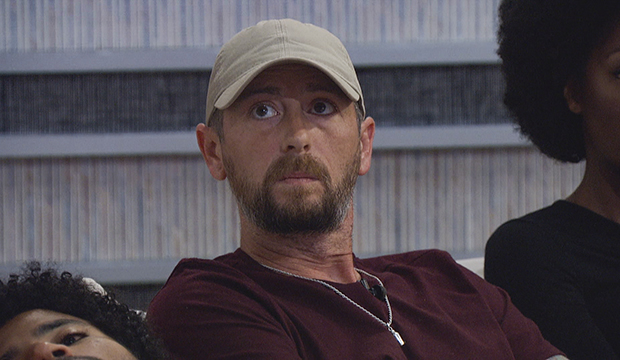 Brandon “Frenchie” French‘s epic fall from power ended with his eviction on Thursday’s live episode of “Big Brother.” The 34-year old farmer from Tennessee was sent packing by an 11-to-1 vote over his Joker teammate Britini D’Angelo. After orchestrating one of the wildest Head of Household reigns in “BB” history, Frenchie immediately paid for it when the current HOH, Kyland Young, took the opportunity to send him out for air hugs with host Julie Chen Moonves.

“I came in strong but I came in with a purpose,” Frenchie asserted during his face-to-face chat with Julie. “My wife told me that if you want to make a change in the game you need to get off the couch and get in the house and go do it. I saw the type of people, like the old guy, always getting evicted first and I wanted to change that. I made it a point to come in, give the first week everything I had and make that change. I’m proud of myself because no matter how hard I played I created that change. I hope future seasons follow the same thing.”

During his chaotic time in the house, Frenchie quickly turned his back on the Slaughterhouse alliance he created, but assured Julie he had no regrets. “The Slaughterhouse was formed to begin with to keep the people that I was most nervous about close,” he explained. “I knew that in time it wouldn’t last. It served its purpose. I got to know them a little better to see how they worked and it came to an end pretty quick.”

On Frenchie’s first night in the house Julie offered the farmer a chance to win two weeks of safety for his team, with the risk of losing his power as HOH if he failed a dice rolling challenge. He turned it down, but later showed he would have succeeded if he had taken the risk. Despite it costing him in the long run, Frenchie is adamant he made the right decision. “I wanted to see my kids,” he said. “As a dad that’s the most important thing to me in life. I knew that if I rolled that dice I was taking an opportunity not to be able to see their pictures. It just wasn’t worth it to me.”

Before leaving, Frenchie was given the opportunity to watch some goodbye messages from his fellow houseguests. He began to tear up when Derek Frazier, the only houseguest who voted to keep Frenchie in the house, called the farmer his best friend and vowed to win the game for both of them. “He’s such an amazing person,” Frenchie said of Derek F. “Even though we come from totally different walks of life, it’s amazing how two people can walk in this house and have an instant connection. Derek and I both did that. Like he said, it was ride or die.”

Following Frenchie’s eviction, Xavier Prather went on to win the live HOH competition, guaranteeing a week of safety for himself and his Kings teammates Christian Birkenberger, Alyssa Lopez and Sarah Beth Steagall. The next wildcard competition and nomination ceremony will air Sunday, July 25 on CBS.