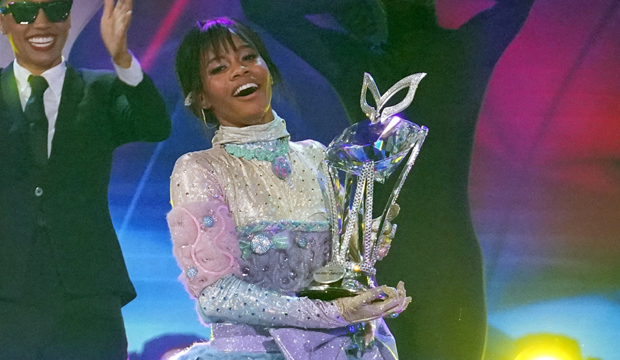 Season 1 of “The Masked Dancer” came to a dramatic conclusion on Wednesday night’s finale, with three-time Olympic gold medalist Gabby Douglas being revealed as the Diamond Mask trophy winner, Cotton Candy. Despite competing against two professionally trained dancers in the finale, Gabby came out on top by incorporating a few tricks she knew the Sloth and Tulip couldn’t match — tumbling skills. Cotton Candy rocked and rolled her way through an inspirational routine to Kesha‘s version of “This is Me” and finished things off by flying through the air in a bouquet of balloons.

SEE Paula Abdul ends ‘The Masked Dancer’ as judge with most correct guesses — how’d she do it?

“This experience has been so amazing!” the gymnast exclaimed during her unmasked interview with host Craig Robinson. “I just love everyone so much.” When asked if it was easy for her to tumble in costume, Gabby responded, “It’s my job to make it look super light, but I’ve never done anything like this before. I’ve never trained with a mask on. This was my first time performing and not being judged. I had so much fun and I’m so grateful and so honored.”

Paula Abdul was the only panelist to correctly guess Gabby was hiding behind the Cotton Candy mask, saying, “You’re the epitome of what this show is about, and that’s heart. And your heart led you to where you are right now.” By correctly naming the champ, Paula became the panelist with the most correct guesses this season, with four. Brian Austin Green and Ken Jeong both thought Cotton Candy was a figure skater, guessing Tara Lipinski and Michelle Kwan, respectively. Ashley Tisdale went with another golden gymnast, Simone Biles.

Helping Paula correctly name Gabby as Cotton Candy were some very helpful hints in her clue packages. The lipstick in Cotton Candy’s package was a nod to Gabby’s lipstick line. Cotton Candy holding a chocolate bar above her head was a clue to her book: “Raising the Bar.” The subway sign labeled “FS” was a clue to the initials of Gabby’s nickname: Flying Squirrel.

Gabby defeated nine other celebrities on her way to winning the Diamond Mask trophy: Ice-T as the Disco Ball, Bill Nye as the Ice Cube, Elizabeth Smart as the Moth, Brian McKnight as the Cricket, Vinny Guadagnino as the Hammerhead, Jordin Sparks as the Exotic Bird, Oscar De La Hoya as the Zebra, Mackenzie Ziegler as the Tulip and Maksim Chmerkovskiy as the Sloth. Gabby will forever own a piece of “The Masked Dancer” history as the first winner of the Diamond Mask trophy. Did you guess the Olympic champ was dancing inside the Cotton Candy costume?