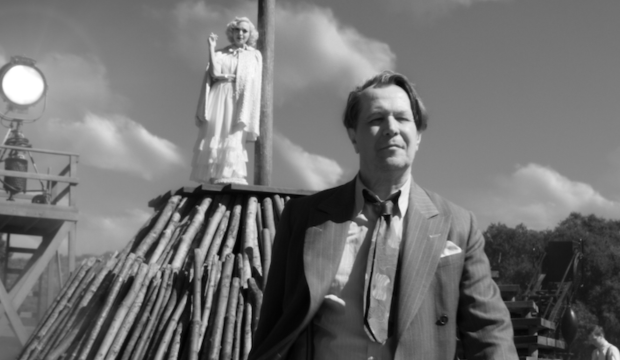 Gary Oldman, whose acting career spans four decades, is most famous for playing secondary roles in high-grossing film franchises. The average moviegoer would likely first recognize him from his portrayal of Sirius Black in the Harry Potter saga or Commissioner Gordon in Christopher Nolan’s Batman trilogy. However, he has earned his greatest critical notices for his embodiments of real-life figures, from his breakout role as punk rock star Sid Vicious in 1986’s “Sid and Nancy” to his most recent outing as screenwriter Herman J. Mankiewicz in the Netflix release “Mank.”

In his review of “Sid and Nancy,” Roger Ebert raved that Oldman’s “driven and relentless” performance goes “beyond movie acting.” Since then, the actor has tested his limits and demonstrated his chameleonic brilliance in over 60 films. His take on Winston Churchill in “Darkest Hour” led to a sweep of the 20198awards season, culminating in what was considered a long overdue Oscar win.

David Fincher’s “Mank” tells the allegedly true story of how Mankiewicz wrote the Oscar-winning screenplay for 1941’s “Citizen Kane” all on his own, without the help of Orson Welles. The seemingly unexciting plot is made fascinating by a number of factors, including the film’s crackling dialogue and faithfully crafted atmosphere. The most vital element is Oldman’s masterful performance, which, in the words of Justin Chang (Los Angeles Times), is infused with “rumpled grace, sozzled wit, and bittersweet feeling.” He plays the writer as a self-destructive drunkard who makes enemies more easily than friends and is fully aware that his wit is too sharp for his own good.

Disagreeable as he is, the character stands out as one of the most heroic Oldman has ever played. His dissatisfaction with serving as a cog in the Hollywood machine inspires him to adopt a devil-may-care attitude toward the studio system and media elite. He takes viewers on a boozy trip through 10 years worth of memories, during which he exposes the ugly aspects of the Golden Age while fighting for his own legacy. Oldman relies on his theatre roots to sell the more intense moments and, whenever he speaks his lines, “you believe the actor thought them up on the spot” (Johnny Oleksinski, The New York Post).

Before he won the Best Actor Oscar for “Darkest Hour,” Oldman was first nominated for “Tinker Tailor Soldier Spy” in 2012. A bid for “Mank” would make him one of only two actors to earn multiple Best Actor nominations after receiving his first past the age of 50. Anthony Hopkins was 54 when 1991’s “The Silence of the Lambs” brought him his first of four lead bids. If the 62-year-old pulls off another win, he will be the second-oldest recipient of the award, behind only Henry Fonda, who was 76 at the time of his win for “On Golden Pond” in 1982.

Oldman’s odds of nabbing an Oscar nomination have increased in recent weeks due to his inclusion in three major precursor lineups (Golden Globes, SAG, and Critics Choice). He currently ranks fourth in our Best Actor race behind Chadwick Boseman (“Ma Rainey’s Black Bottom”), Hopkins (“The Father”), and Riz Ahmed (“Sound of Metal”). We predict that “Mank” will compete in a total of 13 Oscar categories, including Best Picture, Best Director, and Best Original Screenplay.