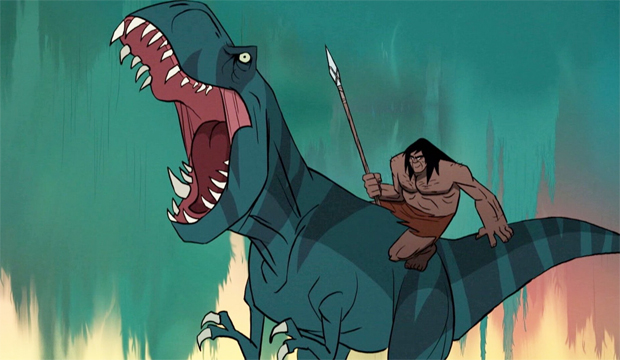 “Genndy Tartakovsky’s Primal” pulled a huge shocker at Sunday afternoon’s Creative Arts Emmys ceremony when it won the trophy for Best Animated Program. The series was in last place in our odds with 9/2 odds of prevailing for the episode, “Plague of Madness.” In addition to winning a juried award this year, the program picked up three juried awards last year for the first half of its first season.

In the episode, the caveman and the dinosaur that are the show’s central characters encounter another dinosaur that’s contracted a flesh-eating virus that’s causing it to appear as if it were a zombie. The infected dinosaur quickly makes the two main characters his next target. They are chased by the dinosaur and eventually trick it into running off a cliff and fall into a sea of magma. The caveman and his dinosaur companion watch as the infected dinosaur succumbs to the molten rock.

The favorite in this category had been Netflix’s raunchy puberty-based comedy, “Big Mouth,” which was on top of our predictions center with 17/5 odds of prevailing for its season four premiere, “The New Me.” In the episode, Nick hopes to rebuild his self-confidence at summer camp after fighting with his best friend, Andrew. These hopes quickly get dashed when Andrew shows up and starts becoming great friends with all of Nick’s friends. At the same time, the rest of the campers get a shock when they discover that their friend Gabe has since come out as transgender and is now living as a girl named Natalie, who is forced to deal with everyone’s inappropriate reactions to her transition. The stress that both Nick and Natalie experience lead to them getting acquainted with Tito the Anxiety Mosquito.

“Bob’s Burgers” was in second place in the predictions center with 39/10 odds of winning for their eleventh season episode, “Worms of In-Rear-Ment.” In the episode, Linda is excited to have the family experience some culture by going to a free performance of the local symphony. These plans come to a screeching halt when Gene realizes that he’s contracted pin-worms. Linda refuses to let this ruin her plans and does everything she can to make sure the outing still happens but the other members of the family realize that they might have been exposed as well. This all makes Linda feel like she’s a bad mother.

In third place was “The Simpsons,” which had 4/1 odds to pick up their twelfth trophy in this category for the 32nd season episode, “The Dad-Feelings Limited.” In the episode, when Marge and Homer befriend Comic Book Guy and his wife, Kumiko, Kumiko realizes that she wants to start a family with Comic Book Guy. It’s something that Comic Book Guy is against at first, but a promising outing with Bart and Lisa soon falls flat and causes him to revisit his family and his upbringing. After realizing that his father was distant because he was afraid he wouldn’t be able to relate to him, Comic Book Guy makes up with his father and tells Kumiko that he’s ready to have children with her.

“South Park” was in fourth place in our predictions center to win, with 9/2 odds, for their hour-long episode, “The Pandemic Special.” The episode focuses on how the coronavirus pandemic has affected the titular mountain town in Colorado. Randy is having a special on his marijuana farm, when he hears that scientists are close to pinpointing the animal that transferred the virus from animals to humans. This causes Randy to be fearful that it will be discovered that his intimate adventures with a bat and a pangolin are what caused the pandemic. All the students, except for Cartman, want to get back to school but with teachers refusing to return until they can get vaccinated, the town is forced to resort to out-of-work police officers (due to too many incidents of excessive violence) as substitute teachers.