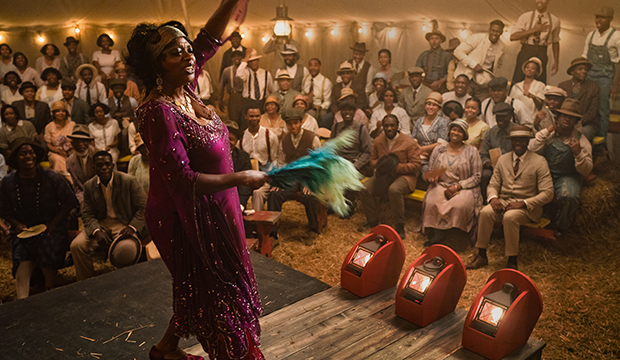 “Ma Rainey’s Black Bottom,” based on August Wilson’s 1982 play, is set in Chicago the summer of 1927 during a particularly contentious recording session between Ma Rainey and her band.  It is a crucial time in her career. Ma has been usurped by blues singers Bessie Smith, Ethel Waters and “Queen of the Moaners” Clara Smith. Jazz has also become more popular than the blues. In fact, the 20s was known as the “Jazz Age.” Levee realizes that and wants to add jazz to Ma’s repertoire.

Produced by Denzel Washington, the Netflix release was directed by George C. Wolfe, who won Tony Awards for his helming of 1992’s “Angels in America: Millennium Approaches” and 1996’s “Bring in ‘Da Noise, Bring in ‘Da Funk.” Ruben Santiago-Hudson, who picked up a Tony in 1996 for his performance in Wilson’s “Seven Guitars,” penned the adaptation. Viola Davis portrays the famed blues singer and the late Chadwick Boseman as her ambitious, rebellious trumpet player Levee. Both are considered shoo-ins for Academy Award nominations.

In a recent American Cinematheque zoom conversation between Wolfe and Courtney V. Vance, who won a Tony Award for Wolfe’s 2013 Broadway production of “Lucky Guy,” the director recalled he had two weeks rehearsal before filming began. “It was a time of building the sense of ensemble,” Wolfe explained. “It was a time of making the band feel like a band in terms of their familiarity. It was a time for digging into that language and becoming so familiar and free inside the language. You’re watching these complicated human beings dancing in the moment and then altering and exchanging and understanding who they are based on how someone is responding to them.”

“Many of your works are focused around themes of Black history and civil rights education,” Vance observed. “How do you feel viewing this as an extension of your work in those arenas? “Well, it’s connected and not connected,” Wolfe explained. “I don’t know why but I seem to keep finding myself back in the ‘20s a lot.” That decade, he noted, is a “really fascinating period because it was a period of extraordinary discovery and expansion and power. At the same time, there was incredible racial brutality going on. There were almost daily lynches happening. ‘

Wolfe also feels the ‘20s marked the first time America evolved. “Jazz gave America its own language. It wasn’t impersonating a European language. That language and the music of jazz gave freedom to all sorts of writers-Langston Hughes, F. Scott Fitzgerald. It was like America finding itself. One of the things I’m really drawn to the 20s is because it’s an explosion and at the same time, a confrontation which is unresolved.”

The play, which opened on Broadway in 1984, is set during the winter. But Wolfe moved the action to the shank of summer. “It was very important to me that we establish Ma’s power base.” The film opens with Ma Rainey’s performing her adoring fans in the South in what is best described as a religious revival tent. “We need to know our power bases, so that’s why I created, for lack of a better word, the opening sequence so we could see her in her element.,” Wolfe explained. “See her as a preacher if you will, with a congregation that is obeying and following and finding their story inside of her song.”

When she confronts a Chicago policeman and the white record producers, “she’s doing it from a place of power: I’m in charge. I’m in charge of my world. Even though now I’m in your world, I’m still going to be in charge.’ It’s a battle and she fight very long and very hard to main it, until at the end of the film she has to sign that [release] contract. She gives up her control. The film is set in 1927 and Ma Rainey didn’t record anything after 1928.”

Levee is fascinating to Wolfe because he envisions him as the future. “He is smart, he is savvy. That was the thing that was very, very important to me. Levee was bright, charismatic and charming and has everything going for him except for the power structure that wants to take away his power.” He is also badly damaged, noted Wolfe, because he experienced racial trauma at a young age “where he had no information or not one to protect him and to give him some clues as to how he could survive it.”

Wolfe wanted the audience to fall in love with Levee so that “his tragedy becomes our tragedy. Levee, to me, is America. Levee is the possibility. He’s the embodiment of a Black man in relation to the white world, but I think he is the embodiment of America. It’s all the promise, all this possibility, and the scars of the past. Where the scars of the past keep him from reaching and achieving of what he and this country could do.”

Ma Rainey, who died in 1939, may not have recorded after 1928, but she bought two theaters in Georgia. “She employed a ton of people,” said Wolfe. “She didn’t conquer New York; she didn’t end up on the pages of Vanity Fair, but she found a world and claimed it as her own. That was her victory. You find your victories where you can and use the power that you acquire to pave the way for other people.”