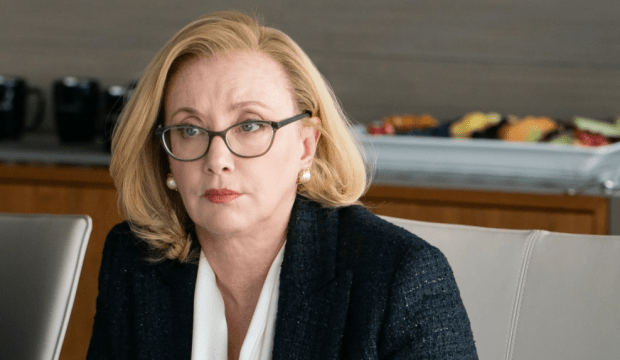 [WARNING: The following story contains spoilers about the Dec. 12 episode of “Succession,” “All the Bells Say.” Read at your own risk.]

Gerri Kellman has had a tumultuous third season on HBO’s “Succession.” J. Smith-Cameron’s character has faced professional highs and lows, from being named interim CEO of Waystar Royco at the beginning of the season to being exposed in a potential sexual harassment scandal in the penultimate episode, plus her betrayal of Kieran Culkin‘s Roman Roy in the season finale. Smith-Cameron has always been a fan favorite character – Gerri’s unexpected flirtation with Roman totally engrossed viewers last season – so with more weighty material, could Smith-Cameron earn a surprise Screen Actors Guild Award nomination next month?

According to our current combined odds, J. Smith-Cameron ranks in our top 10 for a nomination in Drama Actress in seventh place. She will need to outpace at least past SAG winner Julianna Margulies (“The Morning Show”) to land in the top five, but she’s already ahead of contenders like Jung Ho-yeon (“Squid Game”), SAG winners Uzo Aduba (“In Treatment”) and Christine Baranski (“The Good Fight”), Ann Dowd (“The Handmaid’s Tale”), and Mandy Moore (“This Is Us”). We currently predict the nominees will be Jennifer Aniston (“The Morning Show”), Smith-Cameron’s costar Sarah Snook (“Succession”), Elisabeth Moss (“The Handmaid’s Tale”), Michaela Jaé Rodriguez (“Pose”), and Reese Witherspoon (“The Morning Show”).

Smith-Cameron has played an important role in the machinations of the Roy family in the third season of “Succession.” At the beginning of the season, the embattled Logan Roy (Brian Cox) names Gerri as CEO of Waystar Royco while he faces the legal threat posed by Kendall Roy’s (Jeremy Strong) allegations at the press conference that ended season two. Logan confides in his daughter Shiv (Snook), though, that Gerri will only serve as battle armor, shielding the Roy family from significant repercussions. Gerri also spearheads the frantic negotiations at the shareholder meeting in episode “Retired Janitors of Idaho,” as the Roy family struggles to retain control of the company over shareholders Stewy (Arian Moayed) and Sandy (Larry Pine) while Logan is rendered incapacitated by a urinary tract infection.

The finale two installments – the Tuscany-set episodes “Chiantishire” and “All the Bells Say” – could help Smith-Cameron clinch the nomination. Though Gerri has been trying to get Roman to stop his inappropriate comments and advances all season, in “Chiantishire” Roman does the opposite, inadvertently sending an indecent photo of himself to his father that he intended for her. Gerri gets caught in the crosshairs, with Shiv and Logan wondering how long it has been going on and questioning whether Gerri took any actions to stop it, and Shiv urging her to report Roman to the board. When approached by Shiv, Gerri immediately falls back on her training as an attorney. Smith-Cameron is excellent as her face betrays no culpability to Shiv but conveys so much to the audience, who knows how much Gerri cares for Roman and how she probably fears for both of them.

Even though she doesn’t have much screen time in the shocking finale “All the Bells Say,” the look on Smith-Cameron’s face as Gerri betrays Roman by siding with Logan in selling Waystar, asking Roman how siding with him would “serve [her] interests,” was an exquisite twist of the knife to cap off the season.

Even if Smith-Cameron misses out on an individual nomination, she still looks likely to earn her first-ever SAG citation as a member of the “Succession” ensemble. Our users think the series is way out front for a nomination in Drama Ensemble – its first after last season’s shocking snub – and the majority think it will win, too. Smith-Cameron is also celebrating a Critics Choice Awards nomination for Drama Supporting Actress, where she will compete for a win against costar Snook, Andrea Martin (“Evil”), Audra McDonald (“The Good Fight”), Christine Lahti (“Evil”), and Susan Kelechi Watson (“This Is Us”). Her nomination here could bode well for her prospects at SAG.