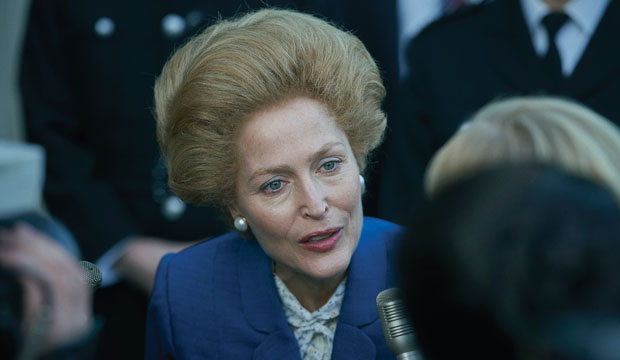 “The Crown” was nominated for a whopping 24 Emmys this year, tying it with “The Mandalorian” as the most recognized show of the year. Besides Anderson, other nominated cast members for Season 4 were Carter, Fennell, Olivia Colman, Emma Corrin, Josh O’Connor, Tobias Menzies, Charles Dance and Claire Foy. Foy won last week at the Creative Arts Emmys. Just prior to Anderson’s victory, the episode “War” won for its writing (Peter Morgan) and directing (Jessica Hobbs).

Anderson previously won the Golden Globe, Critics Choice and SAG Award for her role on “The Crown.” Part of the reason she was so undeniable at awards shows this season was because she completely disappeared into the role of the UK’s first female PM. The hair. The makeup. The walk. The voice. It was all there, and all so very not Gillian Anderson. Awards voters simply can’t resist a good physical transformation, as it allows them to see a familiar actor appear as an entirely different person.

SEEHow to watch the Emmys without a TV

Anderson is now the second person to win an Emmy for “The Crown” for playing the Prime Minister. John Lithgow pulled off the feat for the show’s first season thanks to his can’t-miss performance as Winston Churchill. Every season, “The Crown” skips forward in time as it tells more stories about the real-life British royal family. The most recent fourth season took place between 1979 and 1990, the exact date range of Thatcher’s premiership.

When we recently spoke with Anderson about her transformation into Thatcher, she opened up about her infamous 1997 Emmy speech for “The X-Files.” “I’ll tell you something: I learned my lesson,” she noted about her acceptance speech that focused on friends and family as opposed to her co-star David Duchovny, her creator Chris Carter, her agents, etc. “The next day I was slightly reprimanded [and] I was told that I should take out an ad in one of the trades to thank them in apology,” she laughed. That’s why this year Anderson told us she’s planning on thanking “everybody I’ve ever met” if she wins for “The Crown.”