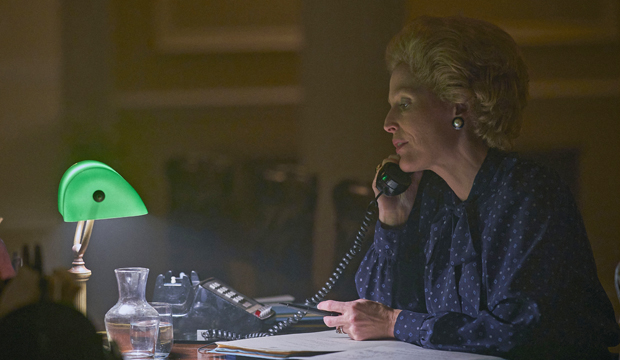 Just as Gold Derby predicted, Gillian Anderson has received a Screen Actors Guild Award nomination for her buzzy role as UK Prime Minister Margaret Thatcher on Season 4 of “The Crown.” She faces off against two of her co-stars, Olivia Colman and Emma Corrin, in the Netflix-only race for Best TV Drama Actress, with the other contenders being Laura Linney and Julia Garner from “Ozark.” With all the vote-splitting and powerful performances, this category is one of the strongest in all of Thursday’s SAG Awards nominations. However, I’m already prepared to call a victory for Anderson based on the following four reasons.

SEE2021 TV SAG Award Nominations: Which Networks, Streamers and Shows Got The Most?

1. She’s won before — twice
Anderson is already a favorite of the actors guild, winning in 1996 and 1997 for her role as FBI Agent Dana Scully on Fox’s “The X-Files.” Sure, it’s been more than two decades, but her nomination for “The Crown” proves the voters haven’t forgotten about her. If Anderson ends up prevailing for a third time, she’d tie Edie Falco (“The Sopranos”) at three victories in this drama actress race. Julianna Margulies still holds the category record at four triumphs — two for “ER” and two for “The Good Wife.”

2. She physically transforms
Every single X-Phile who watches “The Crown” has the same reaction: that’s not Scully! Anderson proves her worth as an actress by completely disappearing into the role of the UK’s first female PM. The hair. The makeup. The walk. The voice. It’s all there, and all so very not Gillian Anderson. Awards voters love a good physical transformation — just look at last year’s SAG champs Joaquin Phoenix (“Joker”), Renée Zellweger (“Judy”), Sam Rockwell and Michelle Williams (“Fosse/Verdon”).

3. Vote-split mayhem
There’s an old rule that if you’re up against a co-star at an awards show, you risk splitting the votes and giving the trophy to someone else. But in this category, there is nothing but vote-splits. Three “The Crown” ladies and two “Ozark” stars complete the race. The last time SAG had a “full house” scenario was in 2018 when Nicole Kidman, Laura Dern and Reese Witherspoon (“Big Little Lies”) and Jessica Lange and Susan Sarandon (“Feud: Bette and Joan”) competed against each other. The stand-out person from the trio, Kidman, took home the trophy. Anderson, Colman and Corrin are the first threesome from the same drama series to compete since “The Sopranos” days, when Falco walked off with the trophy.

4. John Lithgow did it
For the first season of “The Crown,” Lithgow won the individual SAG Award for playing Winston Churchill. Just like Anderson, he was a supporting player competing against leads who went through an acclaimed physical transformation to portray the British PM. Television supporting roles win all the time at the SAG Awards, so that’s not a worry for Anderson. Last year Peter Dinklage (“Game of Thrones”) claimed victory in on the male side, while previously in this female category, Maggie Smith (“Downton Abbey”) and Jessica Lange (“American Hororr Story: Murder House”) both prevailed.