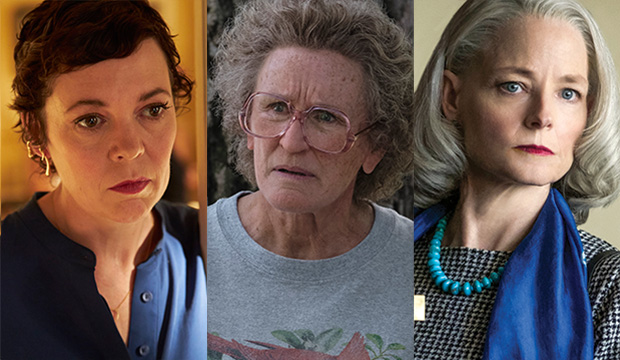 Glenn Close is once again on the path to potentially winning her overdue Oscar this year with “Hillbilly Elegy.” Overcoming the film’s mostly negative reactions from critics, she just earned nominations at the Golden Globes and the Screen Actors Guild Awards, making her a leading contender for Best Supporting Actress at the Oscars. It would be her eighth nomination from the academy, and after seven losses, longtime fans of the legendary actress are calling for the Oscars to finally give her the trophy already. Two of those previous losses were to Jodie Foster in 1989 and Olivia Colman in 2019, and in a cruel twist of fate, she now faces them yet again at the upcoming Golden Globes.

Looking back on Close’s previous Oscar nominations, her devilish work in 1988’s “Dangerous Liaisons” is what many cite as the one for which she should have won the Oscar. Foster won instead for “The Accused,” but three years later she would win again for her far more iconic work in “The Silence of the Lambs.”

Flash forward 30 years to when Close was up for “The Wife,” for which she netted wins at the Golden Globes, SAG and Critics’ Choice Awards. Betting money was on Close to finally win the Oscar, and even she knew she was the favorite, dressed to the nines in a golden gown, ready for her moment in the sun. Alas, Colman was in fact “The Favourite,” pulling off an upset and all but apologizing to Close in her acceptance speech.

Now, all three are nominated in Best Supporting Actress at the Golden Globes — Close for “Hillbilly Elegy,” Colman for “The Father” and Foster for “The Mauritanian.” All three are beloved by the Globes, with Close racking up 15 nominations and three wins, Colman winning for all three of her previous nominations and earning two more bids this year, and Foster now at nine acting nominations and two wins, along with the Cecil B. DeMille Award. Close and Colman both also got in at the SAG Awards while Foster did not, so this may well become a rematch from just two years ago.

It may be difficult to bet against Colman at the Golden Globes since she has yet to lose there and “The Father” performed very well with four nominations, including Best Drama Film. Meanwhile, Close is once again the sole nomination for her film with not even her co-star Amy Adams, a Globes favorite, landing a bid. But Close was also in this position in 2019 when everyone thought Lady Gaga would win the Best Film Drama Actress Golden Globe for “A Star Is Born,” a movie with multiple nominations, unlike “The Wife.” Close won anyway, and the Oscar narrative began. The same situation could happen this year, especially because the Globes have just given Colman three trophies in four years, while the awards for Close have been more spread out. Even if the Hollywood Foreign Press Association did wish to give Colman a fourth award, she also has another nomination on the TV side for “The Crown.”

What should also give Close the advantage is the kind of performance she gives. She fully transforms into the character of Mamaw, speaking with a Kentucky accent, “deglamming” and wearing body prosthetics. It is a far cry from the refined, book-smart woman we see in “The Wife,” and awards voters are often impressed when actors so thoroughly change their appearance. Actresses like Nicole Kidman (2002’s “The Hours”) and Charlize Theron (2003’s “Monster”) can attest to this, as can the Best Supporting Actress winner from just three years ago, Allison Janney, for “I, Tonya.”

But Close’s performance in “Hillbilly Elegy” is more than just superficial tics, with Mamaw representing the kind of no-nonsense grandmother some of us grew up with, and one could imagine voters being reminded of their own. Critics may not be lavishing Close with awards from their own organizations, but the industry and the televised precursors are a very different thing, and “Hillbilly Elegy” might just be her ticket to Oscar glory, with the added quirk of beating some former Oscar rivals along the way.