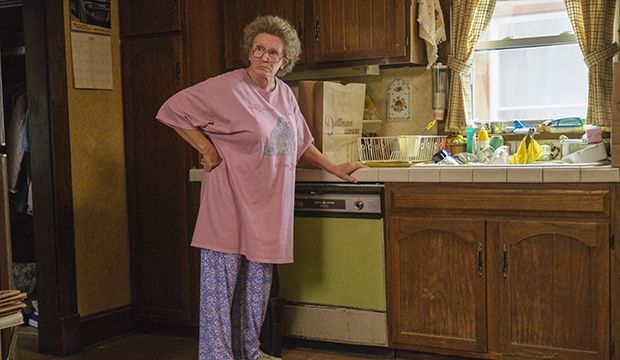 First of all, I want to make something clear. I’m not predicting Glenn Close to win the Academy Award. As much as I want to see her finally recognized with the Oscar, I don’t know that this is her year. But I do believe that it will come someday – with the right role in the right film. However, I don’t think that Close should plan to sit back and relax after her recent losses at the Golden Globe and Critics Choice Awards. She should probably get at least one speech ready for this most unpredictable awards season. She’s going to need it. Here are five reasons why Glenn Close will win the SAG Award for Best Supporting Actress in “Hillbilly Elegy.”

1. She’s Glenn Close.
There’s a lot of name-checking at play when SAG members fill out those ballots. And there are few names that carry more weight than Glenn Close. Her credits in film and television span across five decades. She’s amassed a dozen Emmy nominations for various performances, taking home trophies for three of those. SAG has now nominated her an impressive 10 times, having already rewarded her for work in both television (2003’s “The Lion in Winter”) and film (2018’s “The Wife.”) Her loss for the latter on her seventh try confirmed her status as Oscar’s biggest bridesmaid, and she’s now poised to break her own record with her “Elegy” invite. So when the average SAG voter sees the name “Glenn Close” (the only American, by the way) alongside the likes of Bulgaria’s Maria Bakalova, South Korea’s Yuh-Jung Youn, Germany’s Helena Zengel and even Britain’s “Favourite” Oscar queen Olivia Colman – s/he is going to go for Glenn. It’s not even close.

2. Her role in “Hillbilly Elegy” is classic awards bait.
Okay, so maybe the academy elitists won’t take it – but watch for ordinary SAG subjects to eat it up. The frizzy hair. The horrid makeup. The unflattering eyeglasses. Throw in the Appalachian accent, poor posture and champion chain-smoking and you have a virtual lock. Does any other SAG contender have the material to top this? Once again, no one even comes close.

3. “Hillbilly Elegy” has the Netflix advantage.
The film has been streaming there since November, and I suspect that far more SAG members have seen it than “Borat Subsequent Moviefilm,” “The Father,” “Minari” and “News of the World.” And forget about the poor critical reception. SAG voters aren’t critics. They’re more like your everyday audience. And “Hillbilly Elegy” currently has an upstanding Rotten Tomatoes Audience Score of 84%. The film was even able to pull in a Best Actress SAG nomination for the largely overlooked Amy Adams. More SAG eyes on “Elegy” mean that it’s Close who eyes the prize.

4. SAG often goes for the grandmas.
The academy has become notorious for denying older actresses the Oscar. But the SAG society has a soft spot for golden girls. Look at Lauren Bacall in “The Mirror Has Two Faces,” Gloria Stuart in “Titanic,” Julie Christie in “Away from Her” and Close herself in “The Wife.” SAG embraced all of them, even though the academy didn’t. This year, Close’s Mamaw is the grandest grandma. That could be her ticket to SAG’s Supporting Actress sisterhood.

5. She gets sympathy votes for her Oscar losses.
Two years ago, SAG voters crowned Close the year’s Best Actress for “The Wife,” just before her unexpected loss to Colman in “The Favourite” at the Oscars. Many SAG voters remember that all too well, and feel sympathy for Close due to the perceived injustice. Choosing her will be their way of saying, “Hey Glenn – to heck with the academy. We still love you.” Is it fair for that to be a factor? Probably not. But it’s a reality. And the reality is that it’s good news for Glenn – close to (non-Oscar) awards glory as she’s once again celebrated by SAG.