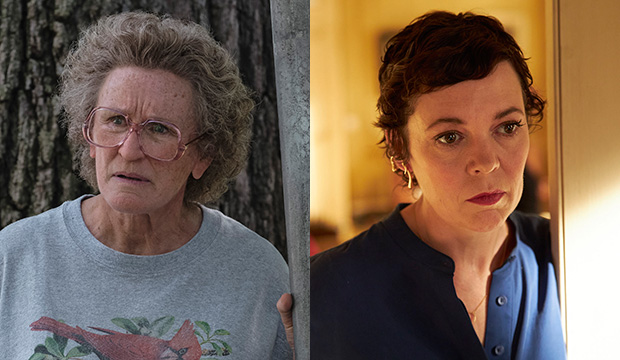 What a difference two days makes. Before last Wednesday’s Golden Globe nominations, “Hillbilly Elegy’s” Glenn Close was in sixth place in Gold Derby’s Best Supporting Actress Oscar odds, but after she accrued a bid there and at the Screen Actors Guild Awards the next day, she has rocketed to fourth place. Another post-Globe and -SAG change is Olivia Colman (“The Father”) usurping the SAG-snubbed Amanda Seyfried (“Mank”) for the top spot. You know what that means: if both Close and Colman make the final five, Colman could beat Close again, which would make her the the fifth performer to defeat the same person twice.

The first four were:

SEE Oscar Experts Typing: Is Glenn Close closing in on an nomination and — gasp! — a win?

The first three instances were in the nascent years of the Oscars — all in a three-year span — and we didn’t get another one until 66 years later with the most famous rematch, Bening-Swank.

This list could’ve grown in the last two years. Two years ago, Rachel Weisz (“The Favourite”) and Amy Adams (“Vice”) faced off again in Best Supporting Actress, 13 years after the former won the same award with “The Constant Gardener” over the latter’s breakout turn in “Junebug.” They lost to Regina King (“If Beale Street Could Talk”). Last year, there were two rematches in the Best Supporting Actor category. “The Irishman” co-stars Al Pacino and Joe Pesci were shortlisted after first clashing in the category 29 years earlier when Pesci prevailed for “Goodfellas” over Pacino in “Dick Tracy.” The race also included Tom Hanks (“A Beautiful Day in the Neighborhood”) and Anthony Hopkins (“The Two Popes”), whose previous bout 26 years prior in Best Actor resulted in Hanks winning for “Philadelphia” over Hopkins for “The Remains of the Day.” They all lost to Brad Pitt for “Once Upon a Time in Hollywood.”

If Colman triumphs over Close again, this would be the first case in which this was accomplished over two categories since Colman had upset Close in Best Actress for “The Favourite” when the seven-time nominee was widely predicted to finally snag her first statuette with “The Wife.” It would also be tied for the second shortest gap at a brief two years — have Glenn stans sufficiently recovered from the trauma of last time yet? — with the Brennan-Rathbone double duel.

And if it does turn out to be déjà vu, they’ll also both go into the Oscar record books in very different ways. Colman would have a perfect 2-for-2 record, just like Swank and Rainer, while Close would tie Peter O’Toole for the most acting nominations without a win at eight.

While Colman has ascended to first place for now, the supporting actress race has been fluid all season without a strong frontrunner. Seyfried moved into first in November after negative “Hillbilly” reviews dragged Close down to sixth, but her SAG snub was, obviously, a huge miss.

“Minari’s” Youn Yuh-jung is in third in the odds and “Borat Subsequent Moviefilm’s” Maria Bakalova is in fifth.