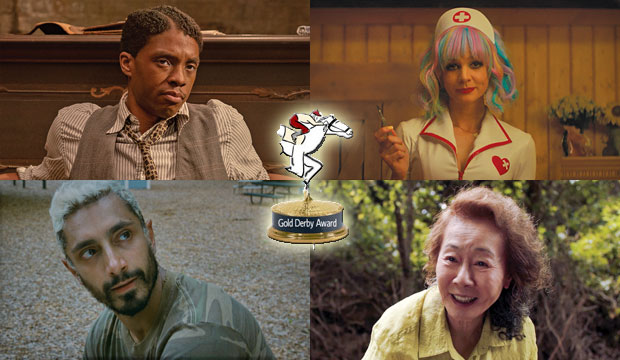 About 2,000 Gold Derby users have already cast their votes for the 2021 Gold Derby Film Awards. But time is running out. Voting for these awards closes on Sunday night, March 7. So visit our predictions center to cast your votes now.

You can vote in 22 categories, most of which match the awards presented at the Oscars with a few differences. The Oscars still nominate between 5 and 10 films for Best Picture on a sliding scale, while our awards nominate an automatic 10. (The Oscars will also go back to 10 in 2022.) In addition, we have two categories that the Oscars don’t consider: Best Ensemble Cast as well as Best Breakthrough Performer for actors and actresses who achieved newfound prominence during the eligibility year.

Voting for nominations is done by a preferential ballot. For Best Picture, select your top five films in order of preference. Your top choice will get the most points, and the 10 films with the most points will be the nominees. In all other categories, select your top three contenders in order of preference. The top five vote-getters for those awards will be the nominees. (See more details on how to vote here.)

In recent years, our renegade users have tended to disagree with the Oscars in the top category. But the two awards lined up in 2020 when “Parasite” was chosen as Best Picture by both our users and the motion picture academy. We also agreed on Best Director (Bong Joon Ho for “Parasite”) and Best Actor (Joaquin Phoenix for “Joker”). Though we gave Best Actress to Oscar-snubbed Lupita Nyong’o (“Us”).

Who do you think deserves to be nominated and win this year? Vote now! And if you’ve already voted but are having second thoughts about some of your choices, feel free to edit your votes as often as you like. No votes are final until voting closes on Sunday.