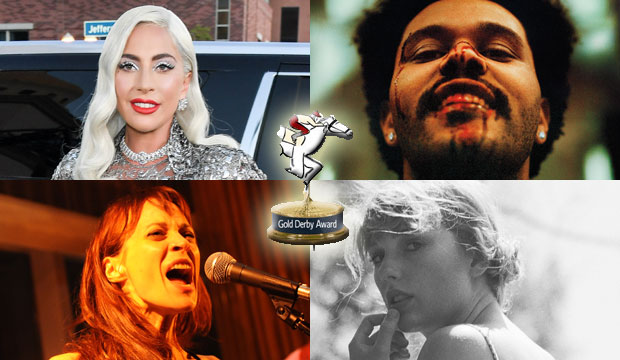 Voting for the 2021 Gold Derby Music Awards winners was set to end on January 15, but in light of the Grammys’ decision to postpone their ceremony, we’ve decided to keep voting open for our first annual prizes honoring the best artists, songs and albums of the year.

The Grammys were originally scheduled to take place on January 31. As the COVID-19 pandemic continues to rage across the US with a new, more contagious mutation of the virus also circulating, the recording academy pushed the show back to March 14. So we’re now giving you until Sunday, February 28, to join the thousands of registered Gold Derby users who have already cast their votes for the GDMAs. If you’ve already voted but want to change your picks, feel free to do that as well. You can update your ballot as often as you like; no votes are final until voting officially closes.

GDMA nominations were announced on November 20 after users cast their votes in 12 categories. Lady Gaga topped our list of contenders with eight bids including Artist of the Year, Album of the Year (“Chromatica”) and two nominations apiece for Record of the Year and Song of the Year (“Rain on Me” and “Stupid Love”). The Weeknd followed close behind with seven nominations. That’s seven more than he got from the Grammys, which mysteriously shut him out completely despite having one of the most acclaimed and successful albums of the year (“After Hours“) and a record-breaking blockbuster hit single (“Blinding Lights”) that has spent longer in Billboard’s top 10 and top five than any other song in history.

Rounding out our list of the most nominated artists of the year are Taylor Swift, Dua Lipa and Fiona Apple with six each. Who do you think our big winners should be? Let us know by casting your votes here.

Billboard 200 goes back to Future: 'I Never Liked You' debuts at number-one, holding off The Weeknd and…

Why Olivia Rodrigo, The Weeknd, and Ariana Grande are artists to beat at Billboard Music Awards

Will Lady Gaga take our breath away (and win another Oscar) with her new 'Top Gun: Maverick'…

2022 Billboard Music Awards predictions: Will R&B categories come down to Doja Cat vs. The Weeknd vs…