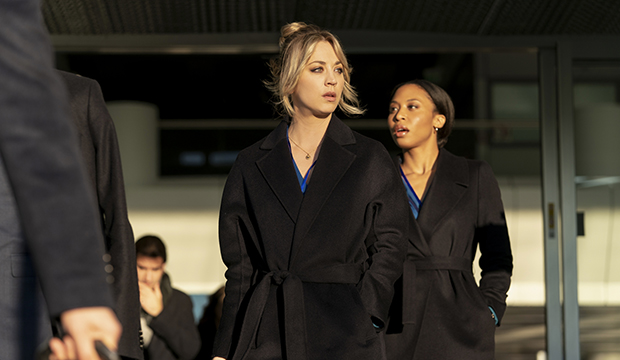 Kaley Cuoco spent 12 seasons as the female lead of “The Big Bang Theory,” the longest-running multi-camera sitcom in history, but she just received her first Golden Globe nomination, for starring in HBO Max’s “The Flight Attendant,” a breezy new series that deftly blends elements of comedy with a thrilling and suspenseful murder mystery.

On the series, Cuoco plays Cassie Bowden, a hard-partying alcoholic flight attendant who is thrust into the middle of a complex mystery full of twists and turns after spending the night with a hunky passenger (played by Michiel Huisman) only to wake up the next morning and find him dead in bed. As she makes an admirable but somewhat clueless effort to clear her name, she finds herself drawn into a web she’s not prepared for and forced to confront her own demons and reckless actions and how they affect not just her but those around her too.

Cuoco, who is also an executive producer on the series, is currently sitting in second place in Gold Derby’s combined odds in the Best TV Comedy/Musical Actress race. But as we head into Sunday’s Golden Globes ceremony, there are a number of reasons you can’t count her out. Here are four of them.

1. This is a breakthrough role, of sorts

With Cuoco’s extensive experience — she has been working in Hollywood for nearly three decades already — she is hardly the traditional rising star the Hollywood Foreign Press Association loves to recognize. But outside of two Critics Choice nominations and one win for “Big Bang,” this is her very first nomination from a major awards show — you can see how much it means to her — so it’s definitely a breakthrough of some sort. No one knows what the HFPA members were thinking all those years when Cuoco was consistently overlooked, but we cannot and should not discount this moment right now because of what happened in the past. If the HFPA is finally recognizing Cuoco’s talent after all this time, we should definitely listen to what it’s trying to tell us.

2. “The Flight Attendant” is exactly the type of program the HFPA loves

The HFPA likes to pat itself on the back for recognizing both new and buzzy programming before Emmy voters, who often jump on board later. “The Flight Attendant,” which premiered at Thanksgiving, is the most recent series of all the programs with actresses in contention, making it the newest series of the bunch. Recency bias is real, and it could give Cuoco the momentum. But the show’s inherent popularity is also important here. Buzz surrounding the show steadily grew every week until it became a bona fide hit, and the HFPA would love nothing more than to recognize one of TV’s best and most talked-about new shows.

3. It’s the perfect opportunity for another star and series pairing to win

Both Cuoco and the series were nominated this year. It’s not uncommon for the Globes to honor a star and their series at the same time. “Fleabag” and writer/creator/star Phoebe Waller-Bridge both won last year, while “The Marvelous Mrs. Maisel” and star Rachel Brosnahan were both winners in 2018. While Cuoco and “The Flight Attendant” are not the only possible comedy pairing out there among the actress nominees — Elle Fanning and “The Great,” Catherine O’Hara and “Schitt’s Creek,” and Lily Collins and “Emily in Paris” are all options — they do feel like the only real contenders (“Ted Lasso” and Jason Sudeikis are arguably the hottest ticket). As wonderful as “The Great” is, the show aired all the way back in last spring, which puts it further from the minds of voters, while “Schitt’s Creek” has never been an HFPA favorite (more on that below). And while Emily might be killing it in Par-ee, she’s not so hot over here in Hollywood at the moment.

With no disrespect to comedy legend Catherine O’Hara or the rest of the cast of “Schitt’s Creek,” which made history at the Emmys when it swept every single comedy category, the HFPA, which is all about new things and being first, seems unlikely to follow in the footsteps of Emmy voters. The show has never been nominated before this year, when it landed five bids, and while it’s not unheard of for the HFPA to hand out make-up awards to shows it had overlooked (think “Modern Family” in 2012, “Breaking Bad” in 2014 or “The Americans” in 2019), that doesn’t always translate into multiple wins. Perhaps if there were no actresses from flashy new programs O’Hara, who’s in first place, might be the obvious pick — she’s certainly got the best shot out of the entire cast of walking away a winner — but with Cuoco’s performance sitting right there, O’Hara might just have to settle for the Emmy. She can take solace in the fact that Julia Louis-Dreyfus never won a Globe for “Veep” despite six consecutive Emmys.