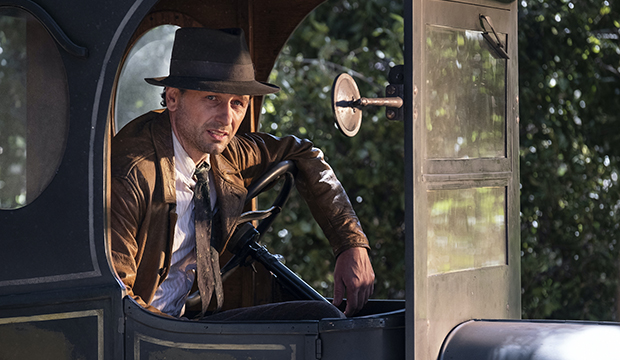 Predicting who will win at the Golden Globes can be a difficult task, especially when the nominations were even more unpredictable — some might say chaotic — than usual, like they were this year. So when it comes to predicting who will triumph in the Best TV Drama Actor race, the truth is that it’s kind of a toss-up.

“Perry Mason” star Matthew Rhys is currently sitting in third place in Gold Derby’s combined odds behind Jason Bateman of “Ozark,” and Josh O’Connor of “The Crown.” Al Pacino (“Hunters”) and Bob Odenkirk (“Better Call Saul”) are bringing up the rear in a distant fourth and fifth, respectively. Despite the odds, there aren’t any obvious choices in this category like there are elsewhere, so you’ve got to be extra judicious when making your predictions.

Even though he’s right in the middle of the pack heading into Sunday’s ceremony, Rhys has the acting pedigree and a memorable performance to help bolster his chances. Six Experts are currently predicting him to win, the same number who are predicting O’Connor to triumph. I’m putting all my money on the Welshman though, and here’s why.

1. Voters like him, even if he hasn’t won yet

Between his turns on FX’s Cold War spy drama “The Americans” and HBO’s reimagining of the crime procedural “Perry Mason,” Rhys has been nominated three times for Best TV Drama Actor. He’s mastered the art of conveying bone-deep sadness and dread, which is not a gift many possess, and it’s clear by now that the Hollywood Foreign Press Association likes this element of Rhys’ work. Plus, in addition to his individual nominations, ”The Americans” won Best Drama Series in 2019. Ironically, Rhys, then fresh off his Emmy win, was predicted to win that year, but lost to Richard Madden from the red-hot “Bodyguard,” making “The Americans the first show in seven years to take home a series Globe without a corresponding acting victory. So with a distinctive performance that saw the actor transform from a disheveled, depressed and down-on-his-luck private detective into an imposing criminal defense lawyer over the course of just eight episodes, and with a history that proves the HFPA is (sort of) paying attention to him, there’s a good chance voters will finally reward him for his work.

2. The field is wide open, so anything can happen

Even with some familiar names in contention, including four-time winner and 19-time nominee Pacino and four-time nominee Odenkirk, the Best TV Drama Actor race is wide open. Odenkirk has never won — the HFPA has never been keen on “Better Call Saul” for reasons that remain especially confusing — and it’s more than clear that Pacino received a nom because he’s Pacino and not because his work on Amazon Prime’s “Hunters,” whose first season basically came and went a year ago, was particularly noteworthy. (Don’t count out Pacino completely — this was a similar boat Billy Bob Thornton was in four years ago with another Amazon Prime show, “Goliath,” and he, the big-name movie star, won in a field that included Rhys.)

Meanwhile, nearly all of last year’s nominees, including reigning champ Brian Cox (“Succession”), aren’t eligible this year (“The Crown’s” Tobias Menzies moved from lead to supporting but did not get nominated), which means there isn’t a single person who has any sort of leg up in terms of year-to-year momentum. Rhys, especially as the star of a new series that was well made if not unanimously beloved, has a much better chance to win over the rest of the group.

SEE Will the Golden Globes play catch-up with Matthew Rhys with a win for ‘Perry Mason’?

3. The frontrunners don’t inspire much confidence

Part of the art of predicting awards is learning to understand how various voting bodies think. The HFPA has never been super hot on “Ozark.” Until this year, in fact, Bateman was the only actor from the Netflix crime drama to receive a bid. And he’s already lost twice for the role: first to Sterling K. Brown (“This Is Us”) in 2018 and then Madden in 2019. Knowing this, it doesn’t seem all that likely that the HFPA, which prefers new shows over aging ones, is going to suddenly flip and go all in on Bateman and the Netflix crime drama even if the show received four nominations this year. Plus, if the HFPA does recognize the show, it may do it in Best TV Supporting Actress for scene-stealing fan favorite Julia Garner, who has twice won the Emmy in the corresponding category.

Of course, Rhys is also sitting behind O’Connor of “The Crown,” and while we know the HFPA likes the royal drama, the show isn’t likely going to win everything for which it’s nominated, not just because it has double nominees in two categories but because the HFPA tends to spread the wealth. Globes voters also seem to prefer the women of the show over the men, with both Claire Foy and Olivia Colman having walked away winners while John Lithgow and Menzies went home empty-handed.

This year Colman is squaring off against Emma Corrin in lead actress, and the latter is exactly what HFPA voters are looking for: she’s young and has given a breakthrough performance. If anyone from “The Crown” is going to win this year, it’s her. In supporting actress, Gillian Anderson is expected to prevail for her turn as Margaret Thatcher, with Helena Bonham Carter in fourth, and coupled with the show’s predicted win in Best Drama Series, that would be three victories without O’Connor. Furthermore, no show has won drama series, actress and actor since “Homeland” in 2013.

4. A win for “Perry Mason” would make up for snubbing Rhys’ work on “The Americans”

This one doesn’t have much to do with Rhys’ actual work on “Perry Mason,” but this wouldn’t be the first time a voting body has attempted to make up for previous egregious snubs by awarding an actor for a new role. I’m not going to call out names to embarrass anyone, but it’s definitely happened. And if any voters are feeling guilty about overlooking Rhys, who won an Emmy for his performance in the FX show’s final season, now is the perfect opportunity for them to clear their conscience and rectify their past mistakes.