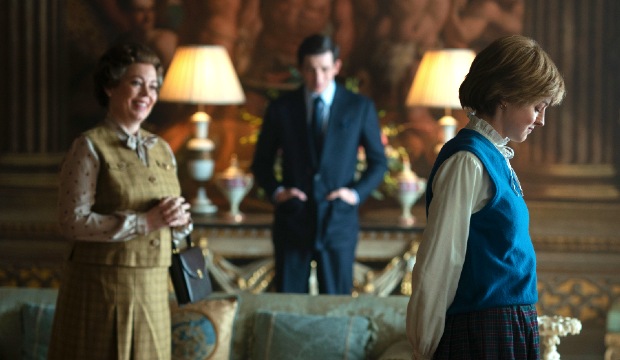 “The Crown” benefited from vote-splitting at the Golden Globe Awards last year but could suffer from the same phenomenon now. Emma Corrin is the overwhelming frontrunner to win Best TV Drama Actress for her portrayal of Princess Diana. Her co-star Olivia Colman is also nominated, having won this category for her portrayal of Queen Elizabeth II last year over “The Morning Show” co-leads Jennifer Aniston and Reese Witherspoon. At the Screen Actors Guild Awards last year, however, Colman was nominated in a combined lead-and-supporting race opposite her co-star Helena Bonham Carter as Princess Margaret; they lost to Aniston, who was nominated alone there, without Witherspoon.

It had been 18 years since the Globes nominated a pair from the same show in drama actress. Edie Falco and Lorraine Bracco were nominated together three years consecutively for the first three seasons of “The Sopranos.” Falco won the first and fourth years, but they lost to Sela Ward for “Once and Again,” then Jennifer Garner for “Alias” in the middle. Falco was also nominated the remaining three years of “The Sopranos” without Bracco, but did not win again. Although she did not have vote-splitting to overcome then, the snubs of Bracco might have indicated dwindling support for the show in general.

“Cagney & Lacey,” “Dallas,” “Dynasty” and “L.A. Law” also saw mixed results in the 1980s. “Cagney & Lacey” and “Dallas” each won once in spite of vote-splitting and lost when single-nominated. “Dynasty” and “L.A. Law” each won twice in a row, with each co-lead winning once. That they flipped might make them the best templates for “The Crown,” but they differ in that those pairs entered into contention together. Corrin only joined “The Crown” this season; Colman faced no internal competition at the Globes last year.

Although it did not replace its cast like “The Crown,” nominations for “Dallas” in this category shifted across its run. Linda Gray began “Dallas” in a supporting role; she did not join co-star Barbara Bel Geddes in Best Drama Actress until the latter’s second (consecutive) nomination, which was the third year of the show. Bel Geddes finally won the next year, nominated again opposite Gray. The Globes dropped both Bel Geddes and Gray the following year, nominating their co-star Victoria Principal in their place after snubbing her for the first four years.

Being nominated against a co-star was a consistent recipe for disaster in the first two decades of the category, which was called Best Female TV Star from 1962-69. “Burke’s Law” and “Peyton Place” lost in the 1960s, then “The Waltons” and “Charlie’s Angels” lost in the 1970s.